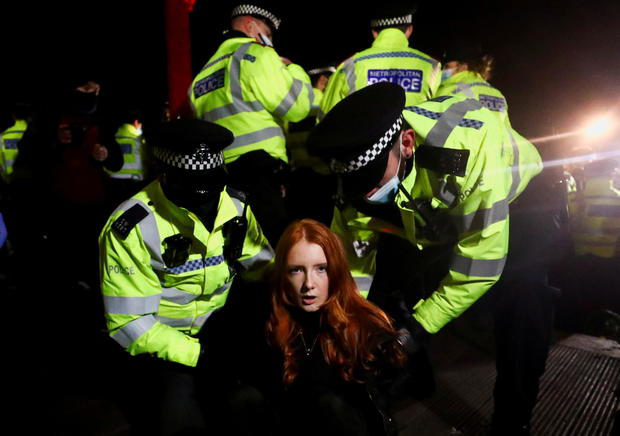 London – Protests against gender-based violence continued Monday in London, as hundreds marched from outside Parliament around the city shouting “sisters united will never be defeated,” “justice for Sarah” and “kill the bill.”

“We don’t just want overpolicing and more police officers who abuse their powers towards women, we want actual action,” said Jennifer, 25. “We want money spent on women’s services, we want there to be a cultural change that protects women and fights against misogyny and violence.”

The demonstration follows two days of protests sparked by the death of 33-year-old Sarah Everard, whose body was found last week after she went missing while walking home in the evening through well-lit London streets. The man accused of killing Everard is a police officer who had been reported for indecent exposure just days before Everard’s death.

Activists had initially applied to hold a socially distanced vigil on Saturday, but permission for the vigil was denied, because the U.K. is currently under a national coronavirus lockdown. That didn’t stop hundreds of people, mainly women, from showing up at a park near where Everard was last seen in south London. After about an hour, police moved into the peaceful crowd forcefully, eventually arresting four people, two of them teenagers.

The protests have also highlighted the actions of London’s Metropolitan Police, which officials including London Mayor Sadiq Khan and U.K. Home Secretary Priti Patel have criticized and amplified calls for pending national legislation that civil liberties groups say would increase police powers to curtail protests to be scrapped.

Fears of not being able to demonstrate if the legislation passes led a number of people and groups to join Monday’s protest.

“It’s our last opportunity, potentially, to voice our opinions with freedom of speech,” said 19-year-old Haley, who noted Black Lives Matter and climate activists Extinction Rebellion were out Monday.

“We’re trying to say everything we can before we’re silenced,” she said.

Everard’s murder has sparked a national debate about violence against women and how it’s treated in the U.K. Britain currently has record-low levels of of rape prosecutions , despite an exponential increase in reports of rape over recent years.

Prime Minister Boris Johnson convened a meeting of the government’s crime and justice task force on Monday to discuss its strategy on violence against women and why rape prosecutions are so low. Britain’s police chief constables were also set to hold an emergency meeting on the subject.

Anger grew quickly over the police’s handling of the Saturday demonstration, and thousands took to the streets of central London on Sunday in protest.

“We’ve learned one thing this weekend: It’s the right to protest, the right to gather, the right to have a voice is fundamental to our democracy, and particularly British democracy,” former chief constable Sir Peter Fahy told a local radio station. “You’ve got to be really wary of more legislation being rushed through just because certain politicians didn’t like certain demonstrations in the summer,” he said.

“I find it outrageous that the police, the Metropolitan Police, who murdered Sarah — they murdered her — and they’re telling us that we’re not allowed, we don’t have permission to come show solidarity. They killed her,” 26-year-old Alexandra told CBS News at the demonstration on Saturday night.

“We’ve all experienced some kind of sexual violence or some kind of assault or feeling unsafe and enough’s enough,” Sarah, 32, also told CBS News at the Saturday night vigil. “This needs to be a turning point so that we just don’t accept feeling scared, feeling intimidated and we can live our lives freely like our male counterparts can.”