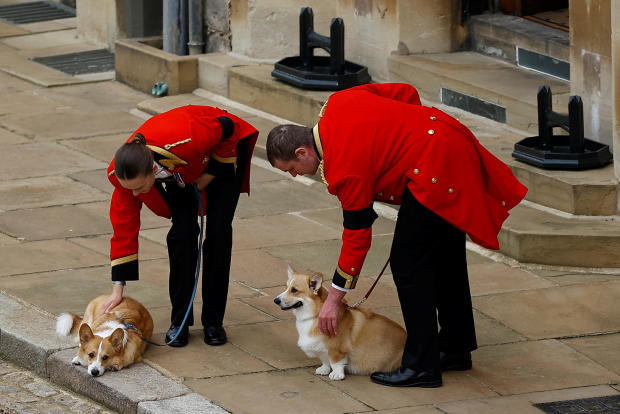 London — Queen Elizabeth’s beloved corgis, along with one of her favorite ponies, were given roles in the late monarch’s state funeral on Monday to say goodbye to their royal owner.

Muick and Sandy, two young corgis, were wearing red and blue leashes when they were brought outside at Windsor Castle for the arrival of the queen’s coffin at St. George’s Chapel. They were being cared for by two royal pages in red frock coats.

Queen Elizabeth owned more than 30 corgis over her lifetime, after she was given her first corgi, Susan, for her 18th birthday. The queen got Muick and Sandy during Britain’s coronavirus lockdown, and the puppies were reportedly a source of great joy for her. They are now going to live with her son, Prince Andrew.

The queen also adored horses, and her pony, Emma, was brought out to the sideline of Windsor’s Long Walk as the queen’s coffin was taken in the state hearse to Windsor Castle.

Emma had been owned by the queen for 26 years, and she stood amid thousands of floral tributes left for the queen. She was in the care of the queen’s stud groom and manager at Windsor Castle, Terry Pendry, who bowed as the coffin passed. Pendry once described Emma as “a wonderful servant to Her Majesty,” and one of her favorite horses that she had ever had.