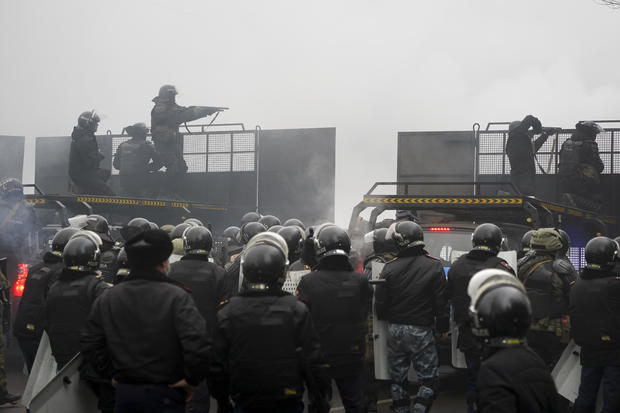 Moscow — Unprecedented protests have led to the de-facto resignation of one of the longest serving rulers of a former Soviet Republic. The president of Kazakhstan sacked his entire government and imposed a state of emergency across several regions on Wednesday in an attempt to curb the protests that have engulfed the country. But it was his predecessor, a former president who still held huge influence over the running of the country, whose resignation on Wednesday most clearly illustrated the gravity of the unrest.

As many as 190 people were injured during the clashes in Kazakhstan’s largest city of Almaty, its public health department said on Wednesday.

Amid the chaos, the U.S. Embassy in Kazakhstan said the American Consulate in Almaty would remain closed on Thursday, at least, with staff working remotely. In a statement posted online, the embassy urged Americans in the country to avoid areas where the demonstrations were playing out, and offered out-of-hours numbers for U.S. nationals to call for both the embassy and the consulate.

Kazakhstan, a Central Asian nation of about 19 million people, is tightly controlled by its authoritarian government. The regime tolerates little opposition and has sought to quash dissent. Spontaneous demonstrations are illegal.

The unrest erupted on January 2 in the western region of Mangystau over a dramatic increase in the price of liquefied natural gas, a popular fuel used for vehicles in the country. The price per liter suddenly doubled, going from about 12-14 U.S. cents at the end of 2021, to 28 cents in the new year.

Authorities promised to bring the gas prices back under control, but the protests spread quickly across the country. By Tuesday, tens of thousands of protesters were taking to the streets, and clashes in some cities had turned violent.

In Almaty, the former capital and still a hub for business, police used stun grenades and tear gas to try and regain control as protesters torched vehicles. According to the Ministry of Internal Affairs, almost 100 police officers were injured and more than 200 people had been detained as of Wednesday morning.

Nazarbayev formally handed the reins of government to Tokayev in 2019, in a controlled departure from the highest office. But Nazarbayev, who assumed the honorary title of “Elbasy” (“Head of State”) and remained the head of the Security Council, still had significant influence over Kazakhstan’s politics.

On Wednesday, Nazarbayev resigned from his post as head of Security Council. Tokayev assumed that role, too, and issued a warning as he did so that his government was “prepared to act harshly” to quell the challenge from protesters.

In a televised address overnight, before Nazarbayev’s resignation from the Council, Tokayev had promised that the demonstrators’ “legal” demands would be met, but he added: “The government will not fall.”

Before the announcement that Nazarbayev was stepping down, videos posted to social media showed protesters overrunning the city administration building and a presidential residence in Almaty, setting both on fire.

The country’s capital, Nur-Sultan, was under a formal state of emergency on Wednesday. Local media reported that some members of the security services had joined protesters in the streets. There were reports that local TV channels and internet service providers were experiencing major outages in the country.

Kazakhstan is a close strategic ally of Russia, which is very sensitive to any unrest in the former Soviet Republics, which Moscow considers its backyard.

President Vladimir Putin’s government has repeatedly accused the West of fueling “revolutions” in Georgia and Ukraine. Russian diplomats are about to begin a series of crucial meetings with U.S. officials to discuss a list of security demands — the most important being Putin’s insistence that NATO refrain from any eastward expansion.

Tension between Russia and the West has soared amid concern over a Russian military buildup along Ukraine’s border, and fear that Putin could be gearing up to invade Ukraine.

Kremlin spokesman Dmitry Peskov said on Wednesday that Kazakhstan had not requested Russia’s help in dealing with the protests, adding that it can solve its own problems.

“It’s important that no one from the outside interferes,” Peskov said, according to state-run RIA Novosti news agency.