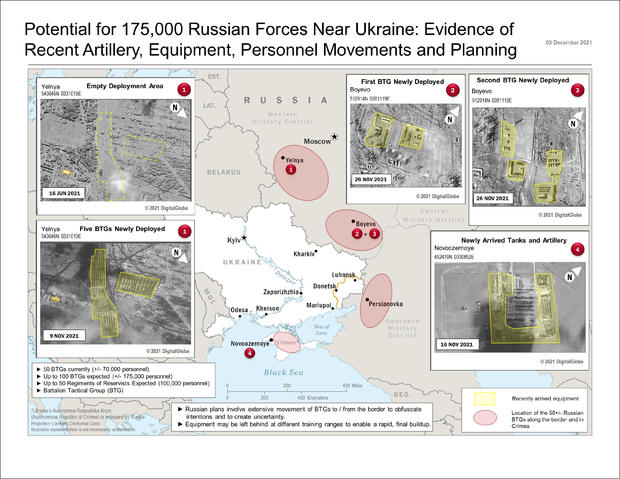 Russia has built up roughly 100,000 troops near its border with Ukraine, prompting fears of an attack in early 2022. U.S. intelligence is warning that Russia could invade Ukraine as early as January, a U.S. official confirmed to CBS News last week.

It’s not yet clear if Russia actually plans to invade — but the buildup of forces has sparked international concern. At a virtual summit on Tuesday with Russian President Vladimir Putin, President Biden reiterated the U.S.’ commitment to Ukrainian independence and threatened severe economic sanctions if Russia invades.

Here’s what you need to know about the conflict.

There are an estimated 100,000 Russian forces massing near the Ukrainian border. Those forces currently lack the support units needed to sustain an invasion, but a U.S. official told CBS News that Russia has embarked on a sudden and rapid program to establish a ready reserve of the support it would need. U.S. officials have also accused Moscow of mounting an aggressive information operation to destabilize Ukraine politically, undermine its social cohesion and pin blame for any escalation on Kyiv and NATO.

National security adviser Jake Sullivan said Tuesday the administration does not believe Russian President Vladimir Putin has made a decision on whether to invade Ukraine, but said Mr. Biden has made clear the repercussions if he does.

Why are the forces causing concern?

What does Putin want?

Russian President Vladimir Putin speaks often of the ethnic ties between Russia and Ukraine and warns against NATO expanding eastward into what he considers his sphere of influence. Ukraine was part of the Soviet Union before declaring its independence in 1991.

Putin also argues that assistance from the West to Ukraine poses threats to Russia’s border. But the Kremlin says Russia has no intentions of invading Ukraine and that its troop movements are defensive in nature.

How has Ukraine responded?

The Ukrainian people have expressed growing support for Western institutions, including membership in NATO. While pro-Russian sentiment does exist in some eastern parts of the country, Ukrainians ousted a pro-Russia president in 2014 and have consistently elected pro-Western politicians since.

Russian forces started building up near the Ukrainian border this spring, prompting the U.S. government to call on Russia to explain the presence of the troops. Mr. Biden called Putin to express his concern. The Russians started withdrawing at the end of April, and said the movements had been part of a large-scale military exercise. Mr. Biden and Putin then had a summit in Geneva in June where Mr. Biden said he confirmed the U.S.’s commitment to Ukraine’s independence.

What has the U.S. done about the new troops?

The latest build-up, which started in October, has prompted more calls from U.S. officials for Russia to explain its intentions. This week, Mr. Biden and Putin held a two-hour virtual meeting largely devoted to discussing Ukraine. According to a White House readout, Mr. Biden reiterated his support for Ukraine’s sovereignty and territorial integrity and called for de-escalation.

If Russia invades, will the U.S. step in?

Mr. Biden on Wednesday said sending U.S. troops to act unilaterally is not on the table. However, the president has said the U.S. and European allies would increase military support to Ukraine and impose severe economic sanctions, including cutting Russia off from the international finance system and suspending the Nord Stream 2 pipeline project, if Russia invades.

The U.S. has been training and advising Ukrainian forces since 2015, and has also provided over $2.5 billion in security assistance since 2014. The support includes items like air surveillance radars, armed patrol boats, and Javelin anti-tank systems, according to the Department of Defense.

What will happen next?

U.S. officials say Russia could launch an incursion at any time, but its forces do not yet have the logistical units in place to sustain an operation for more than a couple weeks.  The U.S. assessment is that Russia would wait for the ground to freeze before sending tanks and other tracked vehicles into Ukraine.

CIA Director William Burns said Monday that Putin may also be waiting for a moment when other European countries are “distracted” with their own affairs, citing the new incoming government in Germany and France’s presidential elections next year.

But for now, it is not clear if Putin wants to actually mount an invasion or is using the threat of an invasion to win concessions from the West.