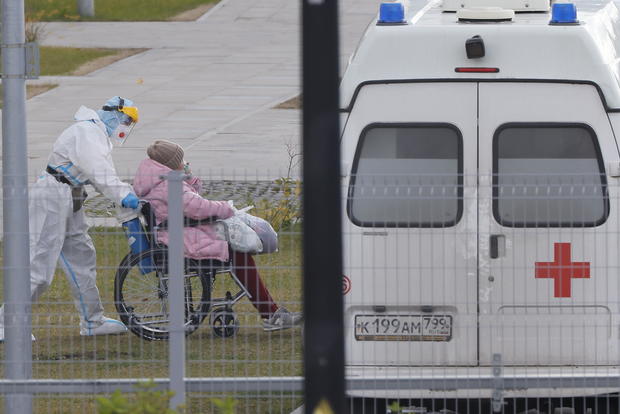 Moscow — With the number of deaths blamed on COVID-19 setting new records almost daily in Russia , the Kremlin accepted a “share of responsibility” for the first time on Tuesday for the country’s lackluster vaccination campaign. Only about 32% of Russia’s total population is fully vaccinated against the coronavirus, according to official data, despite the shots being widely available since the beginning of the year. About 57% of Americans are fully vaccinated, by comparison.

The halting uptake of vaccines in Russia has kept hospitalization and death rates high. Russia reported 34,073 new COVID-19 infections on Wednesday, for instance, and set another record with 1,028 fatalities. The United Kingdom, in contrast, where about 66% of the population is fully vaccinated, is still seeing very high daily case numbers — over 40,000 for about a week — but the daily death toll from the virus has hovered for weeks around 150.

“There is a tradition to blame the government for everything,” Kremlin spokesperson Dmitry Peskov told reporters on a Tuesday conference call.  ”Of course, the government always feels and acknowledges its share of responsibility.”

Peskov accepted that “not everything that needed to be done was done in terms of the information campaign of the lack of alternatives to and the importance of vaccination,” but he added that “a more responsible approach is required from all citizens of the country.”

Mistrust of the vaccines has been widespread in the Russian population, fueled in part by officials appearing on state television early in the pandemic and downplaying the seriousness of COVID-19.

During a government meeting on Tuesday, Deputy Prime Minister Tatiana Golikova appealed to President Vladimir Putin to make the week starting October 30 a “non-working” week, to keep people at home in a bid to slow the spread of the virus. The Kremlin has said it’s considering the notion.

The capital accounts for 21% of Russia’s more than 8 million officially reported cases. Moscow’s mayor has announced plans to reintroduce remote working, along with a vaccination mandate for workers in service industries, and other measures, from next week. All employers will be obliged to have at least 30% of their staff work from home for the next four months, until February 25, 2022, Mayor Sergey Sobyanin wrote on his website.

Employees who have been vaccinated or recovered recently from a COVID infection, along with medical and other critical workers, will be exempt from the requirements.

According to Sobyanin, the number of new cases being registered in the Moscow region since the summer has increased four-fold, and the number of hospitalizations tripled.

“I’m well aware of how tedious and uncomfortable the current restrictions are, but there’s simply no other way to protect you from serious illness,” he wrote, adding a targeted appeal to older Muscovites, whom he said had been reluctant to get the shots.

“Please get vaccinated. That’s how you will protect your health and be able to maintain your usual lifestyle,” the mayor said.

The tightening of restrictions in the capital area comes as most of Russia’s federal 85 regions introduce vaccine mandates for various groups. Digital passes, to show vaccination or COVID test status via a QR code on personal phones, are also required to access many public venues across the country.