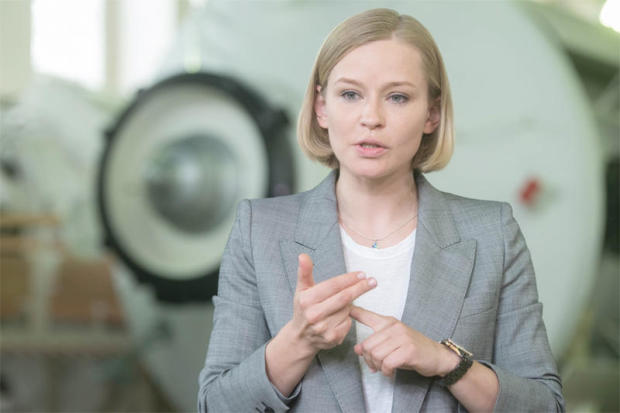 “At the end of 2020, an open competition was announced for the lead role in the first feature film to be filmed in space,” Roscosmos said on its website. Peresild, 36, and Shipenko, 37, were selected “based on the results of medical and creative selection.” Training will begin in June.

“They will have to go through, among other things, tests on a centrifuge, a vibration stand, to make introductory and training flights on an airplane in zero gravity, to undergo parachute training,” Roscosmos said. The training and the flight will be covered by Russia’s Channel One television network.

In a related development, Roscosmos and Space Adventures, a company that brokers commercial flights to the space station, announced that Japanese billionaire Yusaku Maezawa and a production assistant, Yozo Hirano, will launch aboard another Soyuz Dec. 8.

Maezawa, founder of ZoZotown, one of Japan’s largest retail websites, also has chartered an eventual flight around the moon aboard a SpaceX Starship rocket.

The two 12-day Soyuz flights were expected, but Thursday’s announcement makes it official, meaning NASA astronaut Mark Vande Hei , who launched to the station last month with two Russian cosmonauts, will remain in orbit for nearly a full year before another seat is available to bring him back to Earth.

He knew when he launched April 9 that his planned six-month mission could be extended if Roscosmos approved the launch of an actress and director in September. But he said he was prepared for a longer stay.

“We try to make sure we’re ready for anything,” he told CBS News before takeoff. “I certainly feel emotionally prepared. … I’m going to try to really be meditative about the time, try to focus on positive things. I think you could end up in a tough spot if you don’t recognize that it’s a challenging environment.”

Former astronaut Scott Kelly holds the record for the longest U.S. spaceflight, logging 340 days aboard the space station in 2015-16. If Vande Hei returns next March 28 aboard the next available Soyuz as expected, he will set a new NASA record, spending 353 days in orbit.

Vande Hei is not the only station crew member getting a mission extension. Cosmonaut Pyotr Dubrov, who launched with Vande Hei and Oleg Novitskiy, will remain aboard the outpost when Novitskiy departs Oct. 17 with Peresild and Shipenko. Dubrov also will log 353 days in space before returning to Earth with Vande Hei and Shkaplerov next March.

The upcoming Soyuz launches, along with two SpaceX Crew Dragon flights carrying all-civilian crews, are the latest milestones in a new era of commercial human spaceflight.

If the current launch schedule holds up, 12 non-government space flyers will reach orbit over the next seven months along with 12 professionals — six representing NASA, the European Space Agency and Roscosmos and six making up the first two crews to visit the core module of China’s new Tianhe space station.

That flight, chartered by billionaire Jared Isaacman, will not visit the space station. But in January, Houston-based Axiom Space plans to launch four private citizens to the lab complex aboard another Crew Dragon, the first commercial flight to the outpost by an all-civilian crew.

In addition, Blue Origin, owned by Amazon-founder Jeff Bezos, plans to launch a non-government crew on a sub-orbital space flight July 20, the company’s first piloted launch of its New Shepard rocket and spacecraft. Additional up-and-down flights to space are planned before the end of the year.

“This truly is a renaissance in U.S. human spaceflight,” Phil McAlister, NASA’s director of commercial spaceflight development, said earlier this week during a briefing about the Axiom mission. “I think that’s the perfect word for what we’re experiencing.

“This is a real inflection point, I think, with human spaceflight. I’m very bullish on the tourism market and the tourism activity, I think more people are going to fly, they’re going to want to do more things in space. The more things they want to do, that will attract more people. … It’s just what we envisioned for the Commercial Crew Program when we embarked on that about 10 years ago.”