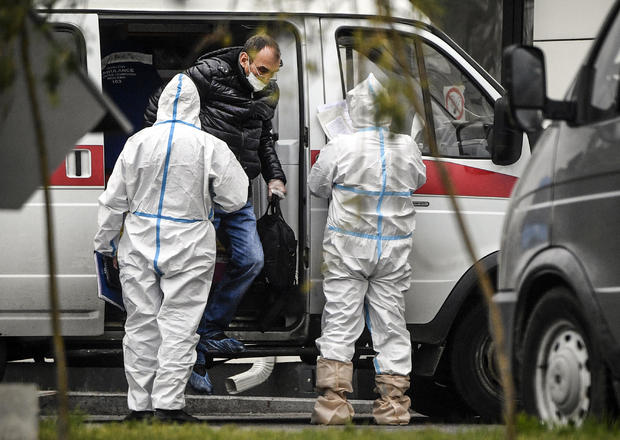 Moscow – Russia is once again grappling with a surge in coronavirus cases. The rate of new daily infections is currently three times higher than what the country was seeing a year ago, despite vaccines now being widely available in the country.

On Tuesday, Russia reported 895 fatalities and 25,110 new COVID-19 infections, bringing the total number of officially reported cases since the start of the pandemic to more than 7.6 million.

“The increase in the incidence of COVID-19 infections has amounted to almost 31% since the beginning of September,” Deputy Prime Minister Tatyana Golikova said in a Tuesday meeting chaired by President Vladimir Putin. “This is 3.1 times more than in the same period last year.”

More than 200,000 people are currently hospitalized in Russia with COVID-19, and almost a million more are under medical watch with possible cases. Officials are worried that things are only set to get worse.

“During all stages of these spikes, we’ve never had our average daily rate exceed 30,000 cases,” Golikova said. “Now we are close to reaching this negative milestone.”

As during the previous waves, Russia’s big cities are being hit hardest. But a spike in cases has been recorded all over the country, with infection rates climbing steadily in 67 of Russia’s 85 regions.

President Putin, who has reportedly set rigid security protocols for his own entourage during the pandemic, including requiring all personal contacts to quarantine for two weeks before they enter a room with him, announced in September he was self-isolating after being exposed to someone with COVID-19.

“I was communicating all day with a person who got sick. He felt that he was sick only the next day. It was an asymptomatic case, but he got sick anyway, albeit the temperature was low, and he had it for two days, so that was it,” Putin said during the meeting on Tuesday, which was carried by state TV.

His spokesperson Dmitry Peskov announced earlier that the president was no longer self-isolating.

“I’ve encountered infected people, sick employees, but I’ve escaped. I did not get sick, anyway, and I hope this does not happen, but I understand that Sputnik has played its role,” Putin added, urging Russians to seek booster shots of the Russian-made Sputnik V vaccine.

Russia registered its first vaccine in August last year after only small-scale phase 1 and 2 trials — far faster than the vaccines approved in the U.S. and Europe — but it didn’t become widely available until the beginning of 2021, due to production issues.

But even with clinics across the country offering Sputnik V doses to anyone willing to have them, vaccine uptake has lagged in Russia, thanks largely to poor communication from authorities and mistrust among Russians who believe the shot was approved too quickly.

The government has managed to get more people vaccinated over the summer by making it mandatory for certain groups, including service and retail workers. Moscow, the capital city, trialed a mandate for residents to show vaccine certificates to enter cafes and other public places for several weeks in July, and obliged businesses to get at least 60% of their staffs vaccinated.

But as those mandates ended, the vaccination campaign appears to have stalled again. Several regional governors said on Monday that vaccination rates had slowed significantly. Officials are proposing various ways to get more people vaccinated, from car raffles to making the shots mandatory for students and other groups.

As of Tuesday, 42.2 million Russians were fully vaccinated, which is about 29% of Russia’s total population. Another 5 million are waiting to receive their second dose. In the United States, by comparison, about 56% of the overall population is fully vaccinated.

“As of now about 2% of the vaccinated get sick,” Health Minister Mikhail Murashko said on Monday, according to Tass. He said the “majority of those who fall ill and get hospitalized are not vaccinated.”