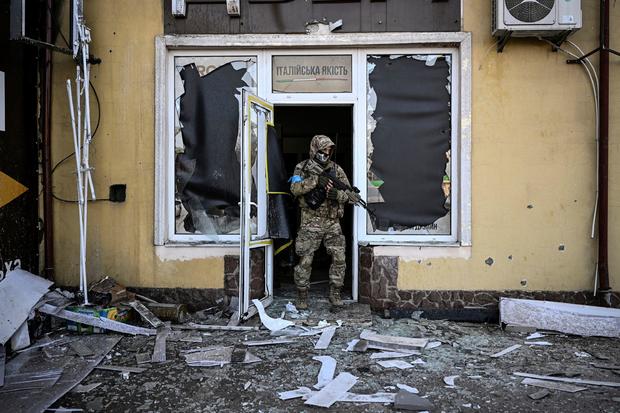 The situation is rapidly deteriorating in Ukraine, where Russian forces are closing in on the capital Kyiv and bombarding and surrounding the strategically important port city of Mariupol.

Ground forces have moved to within 15 miles of Kyiv’s center, according to Britain’s Defense Ministry. Around the city, artillery barrages have sent residents heading for shelter.

In Mariupol, which has faced some of the worst suffering since Russia began its Ukraine invasion, Russian forces shelled a mosque housing more than 80 people, including children, the Ukrainian government said on Saturday. The number of casualties wasn’t immediately clear.

Ukraine’s president suggested the war has reached a “strategic turning point” as the shelling of neighboring cities intensifies.

The U.S. is deploying additional troops to Eastern Europe to support NATO forces. It’s also sending more weapons and billions of dollars in aid to Ukraine.

Mr. Biden on Friday reiterated his position that no American soldiers will go into battle.

On Saturday, two U.S. officials confirmed to CBS News that the U.S. has had limited contact with Russia since the war began. National Security Advisor Jake Sullivan has spoken to Putin’s foreign policy adviser Yuri Ushakov, but the conversations were not productive. President Biden has not spoken with Russian President Vladimir Putin and Secretary of State Antony Blinken has not spoken to his Russian counterpart, Foreign Minister Sergey Lavrov. Russian Defense Minister Sergei Shoigu and Chief of General Staff Valery Vasilyevich Gerasimov are not answering their phones, the officials said.

Additionally, none of the outreach from French, German or Israeli officials appear to be going anywhere.

Amid the developments, the civilian death toll is surging in the third week of the offensive.

In the Black Sea port city of Mykolaiv, the night offers no rest. In an effort to break Ukraine off from vital access to the sea, Russian shelling has broken infrastructure, homes and families.

Two weeks ago, some children – who are now forced to live in a basement beneath a derelict market – were playing hide and seek. Now they’re hiding from banned cluster bombs, according to the local government. Their cold and dark bunker will only get fuller in the days ahead, says the mayor, Oleksandr Senkevych.

CBS News’ Chris Livesay asked him if Russia is attacking civilians on purpose.

It’s not only shelling civilians have to fear. In the occupied city of Melitopol, Russian soldiers captured the mayor, put a bag over his head and took him to an undisclosed location, in broad daylight.

Across Ukraine, those brave enough to step outside find their cities mutilated.

The contested eastern city of Volnovakha is now in the teeth of Russian separatists, brandishing a trademark Z to show loyalty to Putin.

The international community has assessed with low confidence that between 2,000 and 4,000 Russian soldiers have died in action, while U.S. defense officials estimate, also with low confidence, the number to be somewhere closer to 5,000 or 6,000. Russia has not made its official death toll public.

Margaret Brennan and The Associated Press contributed to this report.