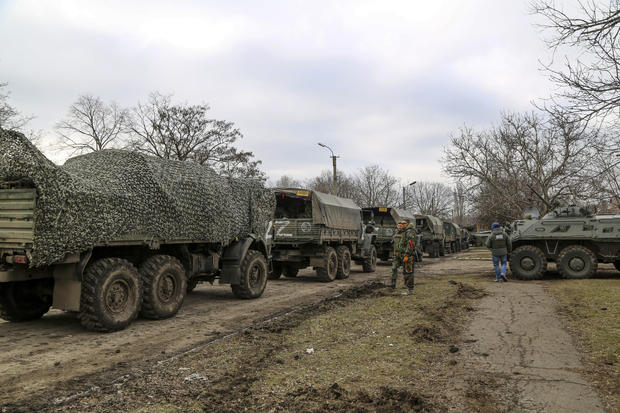 The Russian forces invading Ukraine have faced more resistance than the U.S. believes Russia anticipated, a senior defense official said Sunday morning. The Russian forces have advanced toward three cities, including Kyiv, but have not yet captured a city since invading.

“The Ukrainians are putting up a very stiff and brave and heroic resistance, but we are only in Day Four, and I would be reluctant to provide an estimate of how many more days there are and what those days are going to look like,” the senior defense official said.

The U.S. Defense Department estimates about two-thirds of the combat power Russia had arrayed around Ukraine’s borders have now been committed inside Ukraine. That leaves about one-third that have yet to enter the country, which is a significant amount of power still at the ready.

The Russian advances on both Kharkiv and Kyiv have been slowed by fuel and logistical shortages and by the stiff and “creative” resistance by the Ukrainians, according to the official.

One change that concerns U.S. officials is the first indications the Russians are adopting siege tactics in Chernihiv, on the way to Kyiv, for a full out effort to capture it. The Russians have started firing rockets, which are imprecise weapons, inside the city that risk hitting civilian infrastructure.

On Sunday, Russian President Vladimir Putin put Russia’s nuclear deterrent on high alert in response to statements by Western countries and NATO. The senior defense official said the move was “unnecessary and escalatory” since Russia is not under threat by NATO or Ukraine.

Secretary of Defense Lloyd Austin learned of Putin’s decision from his announcement, the defense official said. Putin’s announcement  came just before Austin hosted an operations and policy synchronization meeting attended by the Chairman of the Joint Chiefs of Staff General Mark Milley, combatant commanders, as well as senior policy leaders. The leaders discussed Putin’s announcement during the meeting.

The Russian invasion into Ukraine advances along three lines of assault. One, north to south, from Belarus towards Kyiv. Another, northeast to south, towards Kharkiv. And a third from the South towards central Ukraine. The southern advance has forked, with some Russian forces headed northwest towards Kherson and others splitting off northeast towards Mariupol.

On Saturday, the Russians used an estimated four landing ships to conduct an amphibious assault about 70 kilometers from Mariupol with several thousand naval infantry troops. They have advanced about 20 kilometers since then, and are about 50 kilometers out from Mariupol.

The U.S. government on Sunday advised Americans in Russia to “leave immediately,” according to an advisory posted by the State Department. The State Department is urging citizens to leave Russia now because an increasing number of airlines are canceling flights into and out of Russia, and numerous countries have closed their airspace to Russian airlines