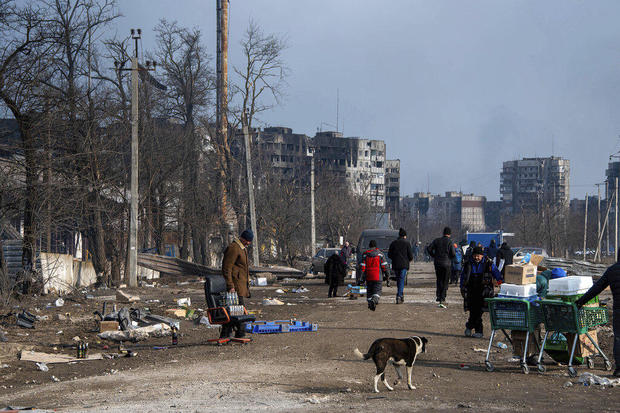 The fall of Mariupol, the scene of some of the war’s worst suffering, would mark a major battlefield advance for the Russians, who are largely bogged down outside major cities more than three weeks into the biggest land invasion in Europe since World War II.

“Children, elderly people are dying. The city is destroyed and it is wiped off the face of the earth,” Mariupol police officer Michail Vershnin said from a rubble-strewn street in a video addressed to Western leaders that was authenticated by The Associated Press.

Russian forces have already cut the city off from the Sea of Azov, and its fall would link Crimea, which Russia annexed in 2014, to territories controlled by Moscow-backed separatists in the east. It would mark a rare advance in the face of fierce Ukrainian resistance that has dashed Russia’s hopes for a quick victory and galvanized the West.

Ukrainian and Russian forces battled over the Azovstal steel plant in Mariupol, Vadym Denysenko, adviser to Ukraine’s interior minister, said Saturday. “One of the largest metallurgical plants in Europe is actually being destroyed,” Denysenko said in televised remarks.

Oleksiy Arestovych, an adviser to Ukraine’s president, said the nearest forces that could assist Mariupol’s defenders were already struggling against “the overwhelming force of the enemy” or at least 100 kilometers (60 miles) away.

“There is currently no military solution to Mariupol,” he said late Friday. “That is not only my opinion, that is the opinion of the military.”

Ukrainian President Volodomir Zelenskyy has remained defiant, appearing in a video early Saturday shot on the streets of the capital, Kyiv, to denounce a huge Friday rally in Moscow that Russian President Vladimir Putin attended.

Zelenskyy accused Russia of creating a humanitarian catastrophe by blocking critical supplies to his country’s largest cities. He also appealed directly to Moscow.

“Time to talk,” Zelenskyy said. “It is time to restore territorial integrity and justice for Ukraine. Otherwise, Russia’s losses will be such that it will take you several generations to recover.”

Across Ukraine, the Pentagon estimates more than 7,000 Russian troops have been killed so far.