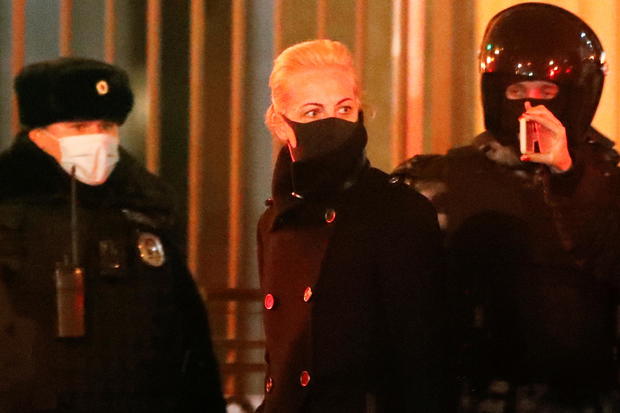 Moscow — Authorities have warned Russians not to participate in local Valentine’s Day shows of support for jailed opposition leader Alexey Navalny this weekend. Navalny’s team has called on the Kremlin critic’s supporters to hold up their cell phone flashlights in the courtyards outside their apartment buildings in Russian cities for several minutes on Sunday evening, and then post photos of the display online in a protest action dubbed by the organizers: “Love is stronger than fear.”

Navalny, 44, was arrested last month immediately upon his return to Russia from Germany, where he spent five months recovering from poisoning with the Soviet-era nerve agent Novichok .

A series of huge, anti-government rallies across Russia, protesting Navalny’s imprisonment , followed the dissident’s sentencing earlier this month to two years and eight months in prison on charges he’s dismissed as politically motivated. Navalny has accused President Vladimir Putin of personally ordering his poisoning and having him persecuted. The Kremlin has dismissed all of the allegations.

Navalny was back in court on Friday, this time for allegedly defaming a World War II veteran in social media comments about a video promoting a vote on changes to the Russian Constitution.

The Valentine’s Day flashmob protests are being seen as an attempt to avoid direct confrontation with the authorities after the street demonstrations of the previous weeks saw an estimated 11,000 people detained across the country. Many senior opposition figures, close allies of Navalany’s, have been rounded up and placed under arrest.

Separately, a team of feminist activists announced a “Chain of Solidarity and Love” in central Moscow on Sunday afternoon in support of Navalny’s wife Yulia and other Russian women they say have been subjected to political persecution. The organizers said in a statement that the format of a human chain was inspired by the women of Belarus, who used it to protest against police brutality and demand fair elections last year.

Yulia Navalnaya reportedly left Moscow for Frankfurt this week. German press said she had come to the country for a private visit, without elaborating. She hasn’t responded to requests for comment. Yulia was among those repeatedly detained by police at the recent protests, but was subsequently released.

The organizers of the backyard protests were clear that they wanted a peaceful demonstration of support for Navalny. The low-key plans even drew ridicule from some opposition supporters online, but Russian authorities appeared to be treating it as a proper protest.

“We urge citizens to refrain from participating in unsanctioned rallies,” the Interior Ministry said in a statement on Thursday seen by the opposition as a response to their plans.

The Kremlin said earlier this week that it wouldn’t “play cat-and-mouse” with activists, but that authorities would be ready to react.

“Our law enforcement officers will bring perpetrators to justice if they violate the law,” Putin’s spokesman Dmitry Peskov told reporters.

Lawmaker Pyotr Tolstoy, of the ruling pro-Putin party, compared Navalny’s supporters to WWII defectors and Nazi collaborators, saying they had used flashlights to illuminate targets for the German air force.

“Want peace, then prepare for war”

Navalny’s conviction and the Russian state’s reaction to the ensuing mass-protests have brought relations between Moscow and the West to a new low. Senior officials in Europe and the United States have threatened to impose new sanctions — threats met in Moscow with characteristic dismissal and derision.

Foreign Minister Sergei Lavrov said Moscow was ready to sever ties with the European Union if the bloc moved ahead with economic sanctions.

“We don’t want to isolate ourselves from global life, but we have to be ready for that. If you want peace, then prepare for war,” Lavrov said when asked whether Moscow could move to cut ties with the EU completely.

His comments were echoed later on Friday by the Kremlin spokesman, Peskov, who told reporters that Moscow needed to be ready to replace any vital infrastructure that it could be deprived of as a result of foreign sanctions.