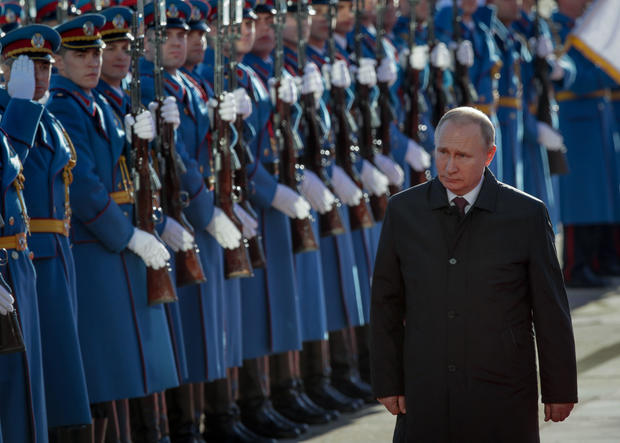 Tension between Russia and its western neighbor, Ukraine, have escalated in recent months. Russia has moved troops and weaponry closer to Ukraine’s borders, raising concern from the U.S. and its allies that President Vladimir Putin could order an invasion of the country.

Even as Moscow has insisted it has no plans for an invasion, it has lodged a slew of warnings and complaints to Western leaders.

Here’s a look at Russia’s current military capabilities, as observed from recent satellite photos as well as up-close photos of its military equipment and troops.

Tanks in a row

This satellite photo, taken by Maxar Technologies, shows tanks lined up on a practice firing range.

This image was taken January 26 over the Pogonovo training area, in western Russia. According to Maxar, this training exercise represents a recent ramping-up of local military training activity, including live-fire artillery and maneuver training, in staging areas near the Russia’s border with Ukraine.

Here, a Pantsir self-propelled surface-to-air and anti-aircraft missile system is tested during a “Peace Mission 2021” joint counterterrorism military exercise between Russia and China.

This satellite image shows towed artillery being fired in a live exercise at the Pogonovo training area January 26.

The training ground is about 150 miles from the Ukraine border.

Bomber in the sky

The supersonic, all-weather attack aircraft was developed in the Soviet Union in the 1960s. It’s built for two people, a pilot and weapons systems operator.

These vague-looking shapes, photographed by Maxar Technologies on January 30, are actually quite deadly.

They’re believed to be SS 26 Iskander missiles — ballistic weapons with a range of about 500 miles. Observers say the weapons are part of a recent deployment.

A demonstration of readiness

The range is in Yekaterinburg, Russia.

Bakhchysarai, located in Crimea, is generally recognized by other countries as Ukrainian territory, but was annexed by Russia, along with the rest of Crimea, in 2014.

This satellite photo captures a row of tents in Yelnya, Russia, about 160 miles from the Ukraine border.

This photo is significant to border watchers for several reasons. Note that some tents have no snow on them — likely because they have been heated, indicating that they are currently occupied.

Here’s another area believed to be housing recently arrived troops, this time at a training ground in Novoozernoye, in Crimea.

This photo was taken by satellite imaging company Maxar Technologies on February 1.

A screen grab taken from a handout video shows a Russian military aircraft carrying Russian peacekeepers taking off from the military base in the Ivanovo region, outside Moscow, on January 6, 2022.

A Russia-led military alliance sent troops to Kazakhstan, where riots stemming from nationwide protests over high fuel prices led to a state of emergency and the resignation of the government.

Military vehicles are on display at the opening ceremony of the “Peace Mission 2021” joint counterterrorism military exercise, on September 20, 2021, in Orenburg, Russia.

The facility is one of several “locations in western Russia where additional troops and ground-forces equipment have recently been deployed,” the imaging company said in a statement.

Warships take part in the main naval parade marking Russian Navy Day in the Gulf of Finland on July 25, 2021.

Military participants from Russia compete in a contest during the 2021 International Army Games on September 1, 2021, in Korla, in northwestern China.

One event in the annual games is a tank biathlon.

A formation of Russian and Chinese warships sails through the Tsugaru Strait during a joint naval exercise on October 18, 2021 in the western part of the Pacific Ocean.

It was the first time Japan has confirmed the passage of Chinese and Russian naval vessels sailing together through the Tsugaru Strait.

Rehearsal with a submarine

Russia’s Project 949AM nuclear-powered cruise missile submarine Orel takes part in a rehearsal for the Russian Navy Day main military parade in the Gulf of Finland.

This satellite photo of the Klimovo Russian rail yard is of interest in part because of what’s on the rails: Vehicles, most likely for military cargo or supplies.

Toward the curving road, there’s another gathering of vehicles that have likely just come off the rails.

Just how close is close?

This map graphic, provided by Maxar Technologies, shows the various areas where the satellite imaging company has recently taken photos indicating a buildup in Russian military might.

The neighboring country of Ukraine is also shown for reference.

Analysts say that this satellite photo shows a “battle group” of various military vehicles, many of whom have arrived over the past several weeks.

The image was taken January 19.

This photo, taken from video and released by the Russian Defense Ministry Press Service on February 7, 2022, shows a detachment of warships passing through ice fields in La Perouse Strait, from the Sea of Japan to the Sea of Okhotsk.

The Russian military has launched a series of drills amid tensions with the West over Ukraine.

Attack aircraft on the ground

Six SU-25 aircraft are seen at the Luninets airfield in Belarus in early February.

The staging may be linked to expected joint exercises between Russia and Belarus. But this image is also consistent with supplemental videos showing Russian forces moving through Belarus and building field camps within 20 miles of the Ukrainian border.

Toward the bottom left are some of Russia’s SS 26 Iskander short-range ballistic missiles. Further to the right is a group of tanks, thought to be enough for a tank battalion. And furthest to the right is self-propelled artillery — essentially, guns on a tank chassis.

This satellite photo shows rows of military vehicles amassing in Yelnya, Russia, about 160 miles from the Ukrainian border.

The presence of military equipment is fairly routine for this area — but not this many, analysts say. Tent camps can be seen on the bottom right.

Here’s a closer view of what are believed to be SS26 Iskander and multiple rocket launchers.

This was taken northwest of Yelsk, in Belarus, on February 4, 2022.

Analysts say the Russian military will often park equipment from the same deployment division together when preparing for a battle.

Warships on the move

Here’s another screen grab, released by the Russian Defense Ministry Press, depicting its warships doing drills in the in La Perouse Strait.

This finding fits a pattern that analysts are seeing across western Russia — deploying new units to existing holding facilities or training areas.

This satellite photo was taken over the Persianovsky training area, 30 miles from the Ukrainian border, on January 28.

View from the clouds

This image, taken from video and released by the Russian Defense Ministry Press Service on February 7, shows a view from the cockpit of a Russian Su-30SM fighter jet as it flies over Belarus during joint drills.

Moscow has deployed troops and weapons to Belarus, adding to a buildup of Russian forces near Ukraine, fueling fears of an invasion.

This isn’t the first time that satellite images have captured troop and equipment buildups on Russia’s border with Ukraine; a similar buildup was captured via satellite in April 2021.

This photo, showing an increase in deployments to the Pogonovo training area, was taken January 16. Vehicle parks with tanks and tent camps housing troops can be seen.

Notice the lack of snow on the tents, an indication that they may be heated and occupied.

Unlike Pogonovo and other training areas, Klimovo is more of a military storage area and staging ground.

Recent Maxar satellite images are thought to show more than 350 vehicles parked at an abandoned ammunition storage facility near the Russian town of Klintsy, a town near where Ukrainian, Russian and Belarusian borders meet.

This is the Brestsky training ground in Belarus, a key economic and political partner to Russia.

New troop tents can be seen on the ground in this photo, taken January 22, 2022.

Satellite photos showed an uptick in inventory, such as armored vehicles, and activity at the Yevpatoria rail yard in Crimea.

The photo was taken February 1.

This is a satellite view of a housing area for troops at Rechitsa, in Belarus.

These satellite images show that, for the first time, several tent encampments have been built at Rechitsa. This photo was taken February 4.

A Russian ship, part of a detachment of warships, is seen maneuvering through ice fields in La Perouse Strait, from the Sea of Japan to the Sea of Okhotsk.

The Russian military has launched a series of drills such as this one amid tensions with the west over Ukraine.