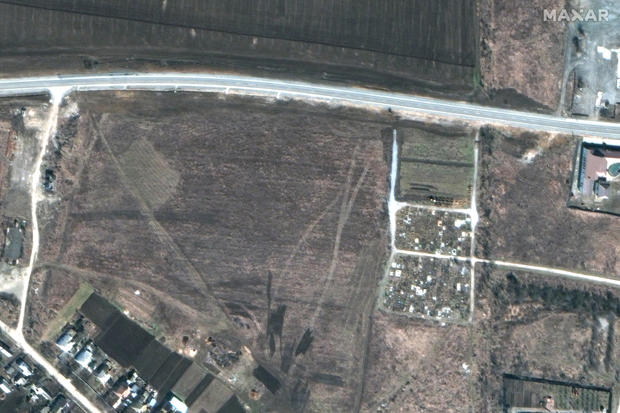 Satellite images released Thursday appeared to show more than 200 new graves in a town where Ukrainian officials say the Russians have been burying Mariupol residents killed in the fighting. The imagery, from Maxar Technologies, shows long rows of graves stretching away from an existing cemetery in the town of Manhush, some 12 miles from Mariupol.

Ukrainian officials said four buses with civilians managed to escape from the city after several unsuccessful attempts. Thousands more remained the city, much of which has been reduced to a smoking ruin in a nearly two-month siege, with over 20,000 people feared dead.

The satellite images were released as Russian President Vladimir Putin claimed victory in the battle for Mariupol, even as he ordered his troops not to take the risk of storming the giant steel plant where the last Ukrainian defenders in the city were holed up.

Instead, he directed his forces to seal off the Azovstal plant “so that not even a fly comes through.”

After nearly two lethal months of bombardment that have largely reduced Mariupol to a smoking ruin, Russian forces appear to control the rest of the strategic southern city, including its vital but now badly damaged port. But the Ukrainian troops have stubbornly held out.

A few thousand defenders, by Russia’s estimate, have been holed up for weeks along with hundreds of civilians in the sprawling steel plant, as Putin’s forces pounded the site and repeatedly demanded they surrender.

But on Thursday, the Russian leader declared victory without taking the plant, which covers 4 square miles and is threaded with some 15 miles of tunnels and bunkers.

“The completion of combat work to liberate Mariupol is a success,” he said in an appearance with his defense minister. “Congratulations.”

Instead of mounting a frontal attack on the plant, Russia apparently intends to maintain the siege and wait for the defenders to surrender when they run out of food or ammunition.

Ukraine scoffed at the notion of a Russian victory.

“This situation means the following: They cannot physically capture Azovstal. They have understood this. They suffered huge losses there,” said Oleksiy Arestovich, an adviser to Ukrainian President Volodymyr Zelenskyy.

Leaving the plant in Ukrainian hands robs the Russians of the ability to declare complete victory in Mariupol, which has seen some of the most dramatic fighting of the war and whose capture has both strategic and symbolic importance. The scale of suffering there has made it a worldwide focal point, and its definitive fall would deprive Ukraine of a vital port, complete a land bridge between Russia and the Crimean Peninsula, and free up Russian troops to move elsewhere in the Donbas.

“If it weren’t for the Ukrainian soldiers, we would have no food,” one young mother, who is among the civilians sheltering in the steel plant, said. Children in the plant were using empty food containers as toys and said they couldn’t wait to go to the grocery store, CBS News’ Chris Livesay reported.

Another woman said some of the children’s “teeth are starting to rot because they lack vitamin D. There’s not enough sun.”

“Please help us,” another mother begged. “And to those who started this war against us, I hope you feel our pain on your own skin, and that your kids can feel this pain too.”