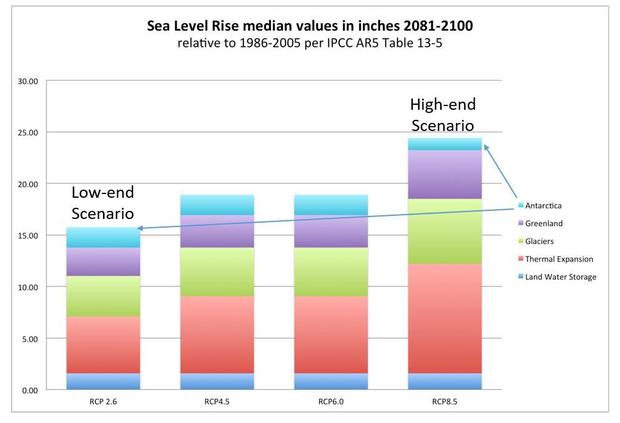 Of the many threats from climate change , sea-level rise will most certainly be among the most impactful, making hundreds of thousands of square miles of coastline uninhabitable and potentially displacing over 100 million people worldwide by the end of the century. This threat is a top concern for national security experts because forced migration poses significant risks to international security and stability.

The magnitude of this threat depends heavily on how much the oceans rise in the coming decades. But because of the complex dynamics of massive ice sheets in Greenland and Antarctica, exact estimates remain elusive, ranging from just over a foot to several feet above current levels. That disparity is the difference between tens of millions of people forced from their homes or a much more unmanageable hundreds of millions displaced.

Now, a new paper published in the past week warns that if global warming continues at the current pace — reaching high-end warming projections for 2100 — then sea-level rise will probably surpass those projections.

Since the late 1800s, sea level has risen an average of about 10 inches globally, but the amount varies from region to region. Last century the largest contributor to the rise of the oceans was thermal expansion; simply put, warmer water expands. But now the melting of ice sheets , mainly from Greenland and Antarctica , constitutes a greater proportion, and that fraction will only grow.

In fact, there is enough ice locked up in Greenland and Antarctica such that if all the ice melted it would cause a sea-level rise of 210 feet, a little taller than the Leaning Tower of Pisa. No scientist is expecting anything even close to that this century, but after the Earth surpasses a certain level of warming, ice sheets become less stable and less predictable, with potential tipping points coming into play.

In the most recent report from the U.N.’s Intergovernmental Panel on Climate Change ( IPCC AR5 ), the median sea-level rise projections by the end of the century range from 16 inches for a low-end warming scenario to 2 feet for a high-end scenario (compared to the average sea level from 1986-2005). The estimates also come with a large degree of uncertainty, which pushes the top bound of likely sea-level rise above 2 and a half feet.

The new paper , titled “Twenty-first century sea-level rise could exceed IPCC projections for strong-warming futures,” takes issue with that upper estimate, saying it is likely too low. The paper was published by a who’s who of the most well known glaciologists and sea-level rise experts, including Martin Siegert, Richard Alley, Eric Rignot, John Englander and Robert Corell.

John Englander is a co-author of the paper and author of the books “High Tide on Main Street” and the soon-to-be-released “Moving to Higher Ground: Rising Sea Level and the Path Forward.” He says this paper is a reaction to a “chorus of concern in the scientific community that the projections for rising sea level were understated.”

He said the research team hopes their work can inform the next major IPCC report, since that’s the most widely cited document on climate change. “With the next report now being prepared for release in 2021-22, our intent was to make the case to the IPCC leadership to explain the reality of Antarctic potential melting better, as it might significantly add to sea level rise this century.”

In a Zoom conversation with CBS News, Englander illustrated that sea-level rise contribution from Antarctica, by far Earth’s largest ice sheet, does not increase from a low-end warming scenario to a high-end warming scenario in the IPCC’s latest report — but in the real world it should. While the possibility of significantly higher sea-level rise due to Antarctica is mentioned in a footnote, it is by no means front and center.

The reason for this, Englander explains, is because IPCC is very cautious with the data it uses in the report and only includes “numbers that meet their criteria for scientific accuracy with an acceptable degree of confidence.” The level of uncertainty in the scientific community stems from the fact that glaciers can be unstable and the computer models used to project melting are still not sophisticated enough.

In the paper, they write: “Existing ice-sheet models are more likely to provide reliable projections if global warming is kept below 2º Celsius [3.6º Fahrenheit], but a world in which warming exceeds 4º Celsius [7.2º Fahrenheit] presents a much more challenging situation. It is quite possible that this extreme situation will lead to reactions and feedbacks in the atmosphere-ocean-ice systems that cannot be adequately modeled at present…”

In the graphic below, put together by Englander and based on the IPCC report, the various contributors to sea-level rise (in inches) are projected out to the end of the century. Antarctica’s contribution is shown in turquoise blue.

Englander explains that in a high-end warming scenario, obviously Antarctica’s ice melt should contribute more to sea-level rise than in a low-end warming scenario, but that is not reflected in the report. “The slight contribution shown of 2 inches in three scenarios, and then one inch in the highest scenario, is clearly paradoxical,” says Englander.

This paradox is something the paper’s authors aim to push the IPCC to clarify in the upcoming report.

Another paper published in Nature this week makes a similar case, focused on the evidence from Greenland. Employing the latest models used to inform the next IPCC report, the authors found that in a high-warming scenario Greenland may contribute an extra 3 inches to sea-level rise by the end of the century, when compared to the former version of models used by the IPCC. This extra sea-level rise is due to an additional 2 degrees Fahrenheit of warming projected by the new climate models in the Arctic .

At the current pace, we can expect at least 15 more inches of sea-level rise by the year 2100. But, as has been the case for the past few decades, the pace of sea-level rise is expected to continue to increase for the foreseeable future. So,15 inches is not only a lower bound, it is also extremely unlikely.

Adding confidence to the paper’s warning that IPCC projections for a strong warming scenario may be too low, is the evidence that sea-level rise has been running on the high end of IPCC projections for decades. In the below visual, projections from 1990 and 2002 are shown in blue and green, compared to actual observations in gold and red. It is clear that actual measurements are above the top end of past expectations.

Because of this evidence and the possibility of “tipping-point behavior,” the paper argues, “outcomes above this [IPCC] range are far more probable than below it.”

For most of us, it is human nature to assume that the height of the oceans we’ve observed in our lives is a constant, but Englander says this perception is misleading. “Rising sea level is easy to miss because it’s a slow effect, like a drip filling a bucket, as the ice sheets on Greenland and Antarctica melt,” he said.

For the past 8,000 years — much of humanity’s modern existence — that expectation of a constant ocean height has remained true. However, the height of the oceans has always changed, sometimes dramatically.

Since the last Ice Age, which reached its maximum extent about 20,000 years ago, global temperatures have warmed about 18 degrees Fahrenheit and sea levels have risen 425 feet; that’s greater than the length of the football field.

Historically speaking, simple math reveals that for every degree Fahrenheit the Earth warms, sea-level eventually rises by an astonishing 24 feet. There is, however, a sizable lag time between warming, melting and consequent sea-level rise.

Considering that Earth has already warmed 2 degrees Fahrenheit since the late 1800s, we know that substantial sea-level rise is already baked in, regardless of whether we stop global warming. Scientists just don’t know exactly how long it will take to see the rise or how fast it will occur. But using proxy records, glaciologists can see that as we emerged from the last Ice Age, sea level rose at remarkable rates — as fast as 15 feet per century at times.

That said, the fact that there is a lot less ice on Earth today than there was 20,000 years ago means the amount of sea-level rise per degree would likely be less now, and the maximum pace may be tempered as well. But even a pace that’s half the historical maximum would still be catastrophic to an Earth with billions of people who depend on stability.

We must also remember that warming today, due to human-caused climate change, is happening faster than it has in at least 2,000 years and possibly over 100,000 years . So scientists just don’t have a directly comparable situation to measure against — once again highlighting our uncertain future.

While scientists and scientific periodicals tend to be conservative in their public projections of sea-level rise, scientists will often remark that they are concerned it may be much worse. When CBS News asked Englander what he thinks is a “realistic range” of sea-level rise by 2100, he said, “With the current global temperature level and rate of temperature increase I believe that we could get 5 to 10 feet before the end of this century.”

While this is just one expert’s opinion, if sea-level rise even comes close to those levels, the impacts would be truly dangerous and destabilizing , dramatically reshaping nations’ coastlines and forcing hundreds of millions of people to abandon their homes . Englander says to reduce the potential impacts, it is better to be prepared for a worst-case scenario.

“We need to begin planning and designing for that while there is time to adapt.”