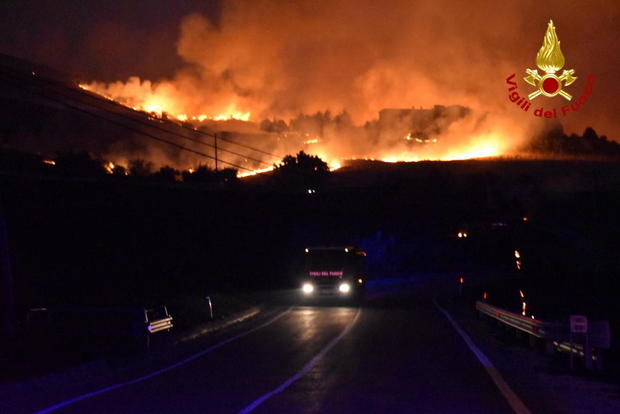 The service later said on Facebook that the peak temperature hit at around 1:14 p.m. local time.

WMO tweeted on Thursday morning that it is working on verifying the reports, saying, “we can’t yet confirm or deny its validity.” The previous record for mainland Europe occurred in October 1977 in Athens, Greece, when temperatures hit 48 degrees Celsius — 118.4 Fahrenheit — the organization said.

Higher temperatures have been reached in the portion of the Middle East that is part of the European continent, with a record of 129 degrees Fahrenheit in Tirat Tsvi, Israel, set in June 1942, according to the WMO .

Syracuse is a United Nations World Heritage Site , known for its Necropolis of Pantalic, which has tombs dating from the 13th to 7th centuries B.C. It was originally a Greek city and passed through different empires before becoming part of modern Italy. The area, according to the U.N., is part of a “unique cultural record that bears a remarkable testimony to Mediterranean cultures from the ancient Greek.”

Cicero, the historic Roman politician and writer, once described Syracuse as the “greatest Greek city and the most beautiful of all,” National Geographic notes.

The record temperature came as a heat wave and wildfires scorch Italy, Greece and other parts of the Mediterranean region.

CBS News meteorologist and climate specialist Jeff Berardelli says that while Wednesday’s record temperature is shocking, “it shouldn’t be a surprise.”

“Warming from climate change acts like steroids for extreme weather,” he said, “making the once impossible not only possible but probable.”

Berardelli explained that the heat wave plaguing the region is caused by a “very large area of high pressure” stretching from the eastern Atlantic across the Mediterranean, bringing significant amounts of sun and sinking air which further heats up the airmass.

“The record heat wave across the Mediterranean adds yet another climate stress on top of what has been a disastrous summer for the region with gigantic fires burning in Turkey and Greece , where up to 10 times their normal hectares have already burned,” Berardelli said. “As temperatures continue to rise due to climate change, fire intensity will continue to amplify, and acres burned will not rise linearly, they will increase exponentially.”