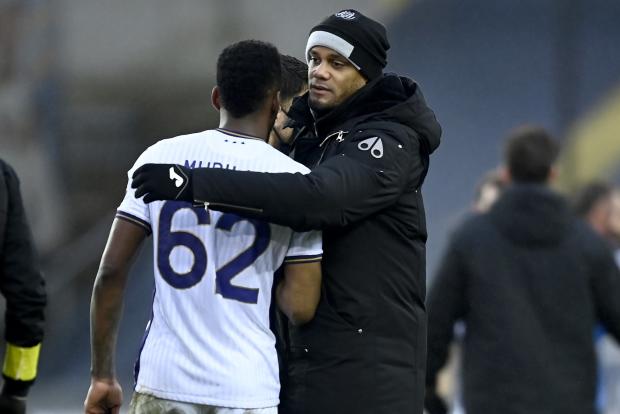 Anderlecht coach Vincent Kompany has accused rival fans of racially abusing him and his players during a Belgian league game over the weekend. The former Manchester City captain said he was targeted by racist insults during the game against Club Brugge and said his players and staff were also subjected to racist abuse. He said Brugge fans yelled shouts of “black monkey.”

“I am going home disgusted and disappointed,” Kompany told TV channel Eleven Sports. “I don’t want to comment on the game. I just want to get together with my staff, to stay with the people who matter to me. We should no longer go through this.”

The son of a Black father and a White mother, Kompany was often the target of racist abuse during his playing years. He has been involved in the fight against racism in soccer for a long time, pushing for more diversity within the game.

Anderlecht backed the coach’s accusations. The Brussels club said members of the coaching staff were repeatedly abused during the game and that some players received racist insults while warming up on the sidelines.

“The behavior of some casts a shadow over Belgian soccer,” Anderlecht said.

Club Brugge issued a statement following the 2-2 draw to condemn “any form of racism.”

“These individuals are not representative of the values and norms of our club, and do not have their place at Jan Breydel Stadium,” the defending Belgian champions said in a message.

“Let’s hope he and his team can recover tonight in peace,” Verlinden wrote on Twitter. “The fight against racism can not tolerate any compromise.”

The incident prompted a strong reaction from Chelsea forward Romelu Lukaku, who accused the Belgian league of leniency in an angry rant on social media.

“I hope you realize that an icon like Vincent Kompany has been insulted because of his skin color. Enough is enough!” Lukaku wrote in defense of his former Belgian national team teammate.

The Belgian league joined the criticism, saying racism and discrimination have no place in society and stadiums. It did not immediately respond to an email from The Associated Press asking whether it would open an investigation into the incident.

Earlier this year, four people were arrested as part of a hate crime investigation into racist abuse directed at members of the England national soccer team. England lost the European Championship game to Italy after three of its players missed penalty shots. Those players — Marcus Rashford, Jadon Sancho and Bukayo Saka — are Black, and were subsequently subjected to torrents of racist abuse online.