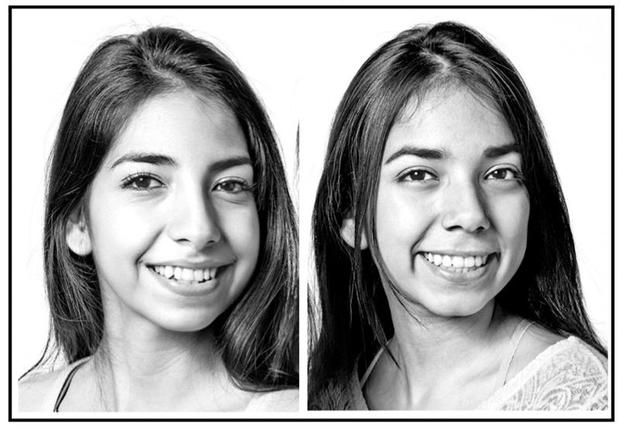 You and your doppelgänger – someone who looks just like you, but is actually a stranger — may actually have similar DNA, according to a new study. Researchers in Spain used photographs by Canadian artist François Brunelle, who has taken pictures of lookalikes around the world since 1999, in the study.

“In the case of many look-alike, the three software gave the same results: they were unable to distinguish the faces, they were virtual twins!” Manel Esteller, senior author of the study, said in an email to CBS News.

The lookalikes then took a biometric and lifestyle questionnaire and also provided saliva samples for analysis, according to a news release.

Esteller said they tested several different components: DNA sequence, or genome; the DNA methylation status, or epigenome; and the bacteria and viral content, the microbiome in the participants’ samples. All three components are critical in determining cell and tissue activity.

When DNA samples are uploaded to a heatmap, similar samples group or “cluster” together. According to the study, nine of the 16 pairs (56.2%) clustered together, and were considered “ultra” lookalikes.

“When we uploaded the DNA sequences of the look-alike to the faces and genomes of the general population, each person in the study matched its corresponding double and was not closer to any other human,” said Esteller, who works at the Josep Carreras Leukaemia Research Institute in Barcelona, Spain.

Lookalikes shared physical traits like weight and height – and even behavioral traits, according to the press release.

“It is said that our face reflects our soul,” Esteller said. With the written questionnaire, the researchers found the lookalikes “not only shared the face, but also other features beyond such as anthropometric characters (i.e., height, weight) and personality traits (i.e. tobacco addiction, education stage that could relate to intelligence quotient IQ),” Esteller said.

The researchers, who published their study in Cell Reports, said the study was limited by the sample size, which was predominantly European participants. They also used 2D black and white images of the lookalikes, which puts a limitation on the study.

However, the study’s findings could be useful in the future. “These results will have future implications in forensic medicine—reconstructing the criminal’s face from DNA—and in genetic diagnosis—the photo of the patient’s face will already give you clues as to which genome he or she has,” Esteller said in the news release.

In his email to CBS News, Esteller said the research means facial features could potentially be used to infer the presence of genetic mutations that could cause diseases like diabetes or Alzheimer’s.

More photos from the study:

Caitlin O’Kane is a digital content producer covering trending stories for CBS News and its good news brand, The Uplift.