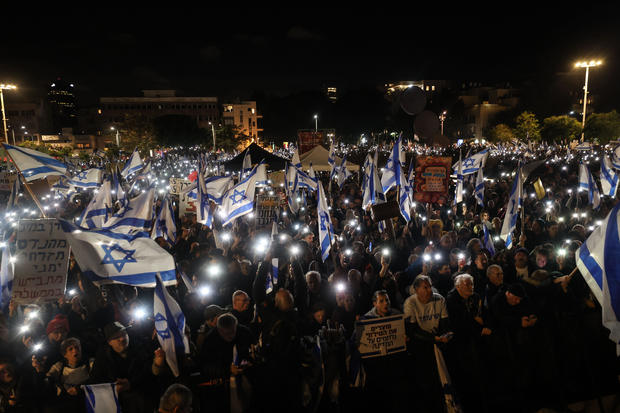 Tel Aviv —Tens of thousands of Israelis turned out in the rain Saturday night to protest the country’s new government — led by Prime Minister Benjamin Netanyahu — which includes far-right, ultraconservative and religious parties. The Netanyahu coalition’s proposed policies pose a threat to democracy and human rights in Israel, the protesters say.

More than 80,000 people demonstrated in Tel Aviv, according to local media, and smaller protests took place outside Netanyahu’s residence in Jerusalem, and in Haifa.

“This is a fight for our homes, for our future, for the future of our children,” Victor, 46, told CBS News.

Among what demonstrators oppose includes proposed judicial reforms that critics say would undermine the Israeli Supreme Court and Israel’s system of democratic checks and balances. The reforms would give Israel’s parliament the power to overturn supreme court decisions with a simple majority vote, as well as power over the appointment of judges.

“It is the same way as every modern liberal democracy has fallen,” Victor said. “This is the initial step…To divide and cancel the link between the different branches of government.”

The country was facing the “highest possible” stakes, Victor added.

The 73-year-old Netanyahu, who has been back in power in Israel for about two weeks, is his third stint as prime minister, and was elected despite facing criminal charges of corruption. Critics say his coalition’s proposed overhaul could make those charges go away.

Netanyahu’s return to power was made possible by a coalition of far-right and ultra-Orthodox parties who have announced intentions to roll back a number of social reforms which, if enacted, would undermine rights for women and LGBTQ+ people, and expand Jewish settlements in the West Bank, which is against international law.

“We came to protest against the government’s intentions and attempts to politicize the legal system, to weaken the supreme court, to politically influence the process of electing judges, thus making it harder for minorities to express themselves, for people to defend themselves against official or government oppression,” Dan, a pediatric dentist, who was demonstrating with his daughter, Tamar, told CBS News.

There was a large police presence in Tel Aviv ahead of Saturday’s demonstration, with traffic blocked off on surrounding roads. Police sources told Israeli media that law enforcement were instructed to be “very sensitive,” and let the protest proceed peacefully. There was no word of any significant violence or any injuries, local media said.

“What’s happening is really a direct threat to minority groups, to Palestinians as well,” said the 26-year-old Tamar, a master’s degree student in Middle Eastern history. “It’s important to emphasize that there’s a voice within the Jewish community. Also thinking of the Palestinians and supporting their freedom and their basic human rights, and the LGBTQ community, women. I mean, this coalition is extremely far-right, extremely religious.”