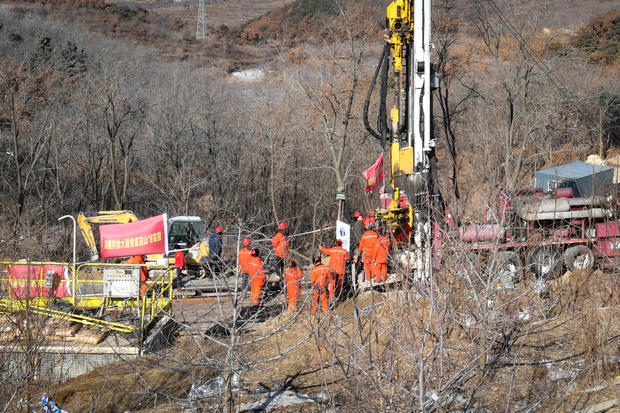 Beijing — It will soon be Day Ten of a meticulously slow mine rescue operation in China’s eastern Shandong province. State media say 22 workers were trapped more than 2,000 feet underground after an explosion damaged the access shaft to the gold mine on January 10.

Rescue efforts have pushed ahead since then, with workers drilling a series of small boreholes deep into the ground to reach the trapped miners. So far they’ve send down at least three rounds of food and medicine.

It has also enabled the rescuers to communicate with the trapped men — first through handwritten notes and now via a telephone line. After an urgent, initial request for medicine and pain killers, the miners on Tuesday asked for porridge and pickles to be sent down.

One note that came up on Sunday confirmed that 12 miners were alive at that time — 11 of them together, but one stuck about 150 feet below the group. They said they were suffering from toxic fumes and rising water levels.

The fate of the other 10 miners was still unclear on Tuesday. Rescuers knocked on the drilling pipe leading down to them early Monday, but there was no response.

The boreholes work for food and medicine, but they’re only about a foot wide, so they’re no help in bringing the trapped miners back up to the surface.

Wider rescue shafts are being drilled, but as of Tuesday the main shaft remained the only way in or out, and officials said the stability of that passage still couldn’t be verified.