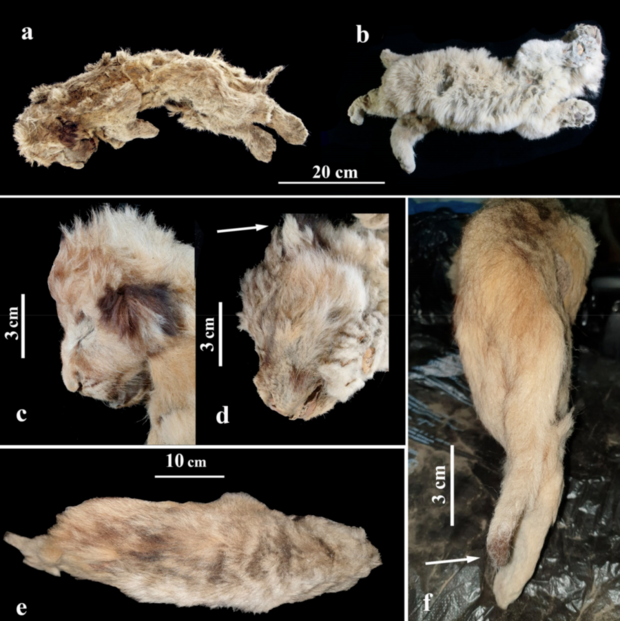 The mummified remains of two cave lion cubs were discovered in Russia, and the recently unveiled specimens may be the best examples of cave lion mummies in the world.

Boris, the male cub, was found in 2017 when Boris Berezhnev, a local resident and licensed mammoth tusk collector, was searching for mammoth tusks along the Semyuelyakh River in Siberia. The cub is around 43,448 years old.

Just a year later in 2018, a female cub was found about 15 meters away. Researchers named her Sparta, and she is roughly 27,962 years old. Both cubs were discovered around 10 to 12 meters deep and are around the size of an adult house cat. The cubs were only one or two months old when they were mummified.

Researchers identified the two cubs as cave lions in a research paper published August 4 . Cave lions lived across Europe and Asia until their extinction around 10,000 years ago. These two specimens are particularly important due to their well-preserved state.

“Finding intact frozen specimens like this is important,” professor Love Dalen, a member of the Stockholm University’s Center for Palaeogenetics research team, told CBS News. “It lets us discover new things about extinct species, such as the color of their fur… these frozen animals often have excellent DNA preservation, letting us investigate the genomes of extinct animals.

“The cub named Sparta is especially unique since it is likely the best preserved Ice Age specimen ever found,” Dalen said.

Because they were frozen in ice, the color of their fur seen in photos taken after their discovery is probably the same as it was when they were living.

Cave lions are similar to modern African lions, but they “likely diverged from modern lions around 1.85 million years ago,” Dalen says.

“They were up to 20% larger than modern lions, and the males did possibly not have any mane. The cave lion was likely adapted to cold environments, and were a top predator in the mammoth steppe ecosystem.”

Cave lions are particularly interesting because of the number of prehistoric paintings depicting them —  paintings that have actually helped researchers learn about the extinct animal’s anatomy.

“The cave paintings only show lions without manes,” Dalen says. “So one hypothesis based on the cave art is that the males lacked manes, something that we can possibly test using genetic methods in the future.”

While researchers say it is “very difficult” to pin down what killed the two lion cubs, it is clear that they were not killed by predators. There is also no evidence that scavengers had access to the cubs after they died, as there are no teeth marks anywhere on the remains.

This indicates that they may have been buried under the ice soon after their deaths. One possibility floated by researchers is that a landslide buried their dens. Both cubs had skull damage and rib dislocations, which supports this theory.

Two other lion cubs had previously been discovered in the same river basin, leading researchers to believe that the area was a favorite breeding site for cave lions.