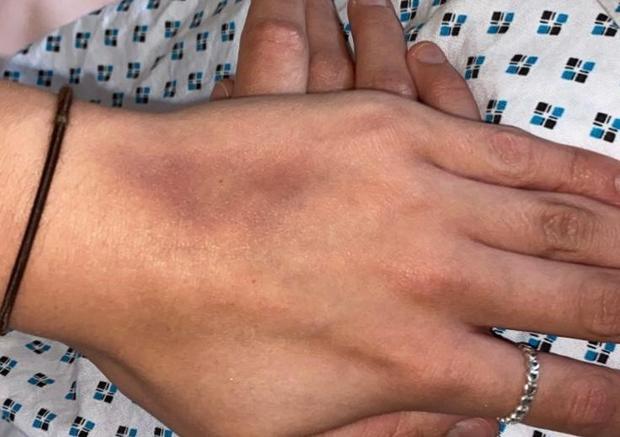 London — 19-year-old student Sarah Buckle was out clubbing with her friends when something went terribly wrong.

“Apparently I started screaming and then throwing up and going unconscious and coming back around, and it was just this horrible cycle,” Buckle told CBS News. “My friends, at this point, could tell: ‘No, something’s really, really wrong… She’s not had too much to drink. This is something completely different,'” Buckle said.

Her friends took her to the hospital, where she woke up the next morning with no memory of what had happened the night before. Her hand was throbbing, and a bruise was developing with what looked like a needle prick in the middle.

She checked with the hospital about whether she’d received an IV and was told she hadn’t. She said the nurses told her the bruise was very strange.

“When I spoke to police, they also found it very strange, and a scientist who works with the police had a look and said, ‘Well, that definitely looks like a needle prick.'”

Buckle’s is one of a growing number of reports of suspected spiking involving needles in the U.K.

Over the past two months, there have been nearly 200 reports to police of people who suspect they may have been slipped something to drug them or incapacitate them while on a night out and, alarmingly, there have been at least 56 reports of suspected incidents involving needles.

“Why would people do this?” Buckle said. “Drink spiking has always been a big issue… and the suspected new method is just even more, just, violating. And it is really dangerous.”

A lack of systems and infrastructure to address spiking, even with the familiar means of slipping something into someone’s drink, is making it more difficult for authorities to determine what, exactly, is going on.

By the time law enforcement gets involved in cases like Buckle’s, it’s often too late for them to run tests for drugs that may have been used for spiking.

Professor Adam Winstock, who runs the Global Drugs Survey, told CBS News that it would be difficult to inject someone with a needle or syringe with enough of a drug to spike them without them noticing.

“Whether or not we’ve got copycats who are simply going around with a needle and jabbing it into people, whether it’s a safety pin or something, I don’t know,” he said.

“I think we need to put the threat of needle injections in perspective,” he added. “The most common way people will attempt to take advantage will be adding things to alcoholic beverages, and the drug most commonly involved will be adding more alcohol.”

Winstock said the scale of the problem of spiking in general remains unclear.

“We have no good data on just how common this is, but what we do know is that most women who were taken advantage of while intoxicated with drugs and alcohol did not report it to the police, and they don’t report it because of shame, stigma, uncertainty about what happened.”

Buckle still doesn’t know what really happened to her that night.

“It’s been documented as unconsentual administration of a toxic substance with possible further intent to assault,” she said, though the police told her it’s unlikely they will ever find out who spiked her.

“I didn’t really speak about it for a while because I just thought I was going crazy. The police were really confused as well. I think they were very supportive, but they were trying to process what could have happened. And then it wasn’t until a few weeks later, where lots more reports of the same sort of thing started to come out, and it was horrifying to hear that this was happening to other people, but at the same time, it assured me I wasn’t going crazy.”

Boycotts of clubs and bars have been organised in cities across the U.K. to demand that club owners and police change safety protocols to address the threat.

“There is so much which they must be doing. They must provide a medic on site. They can’t have any CCTV blind spots… They need to provide drink-stoppers. They need to search people thoroughly on doors,” Buckle said. She also wants regulations put in place that allow hospitals to contact the police on behalf of a suspected spiking victim.

“I can’t name you one person who doesn’t know somebody who’s been spiked,” she told CBS News. “Everybody knows it’s an issue, and I think we’re finally – we’ve just had enough.”