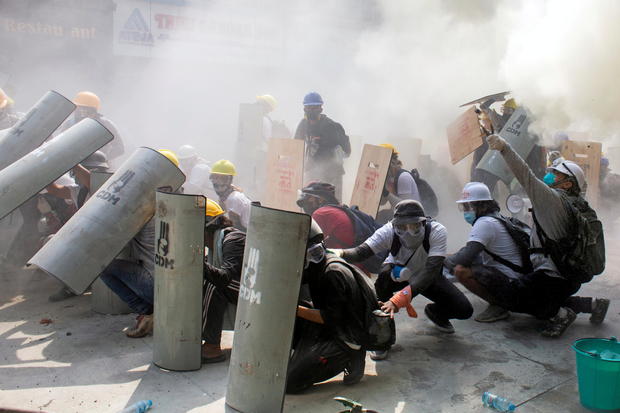 Security forces in Myanmar opened fire and made mass arrests Sunday as they sought to break up protests against the military’s seizure of power. The United Nations human rights official said it had “credible information” that 18 people were killed and 30 were wounded.

That would be the highest single-day death toll among protesters who are demanding that the elected government of Aung San Suu Kyi be restored to power after being ousted by a February 1 coup. About 1,000 people are believed to have been detained Sunday.

“We strongly condemn the escalating violence against protests in Myanmar and call on the military to immediately halt the use of force against peaceful protesters,” its spokesperson Ravina Shamdasani was quoted saying.

An Associated Press journalist was taken into police custody on Saturday morning while providing news coverage of the protests. The journalist, Thein Zaw, remains in police custody.

The Democratic Voice of Burma reported that as of 5 p.m. in Myanmar, there had been 19 confirmed deaths in nine cities, with another 10 deaths unconfirmed. The independent media company broadcasts on satellite and digital terrestrial television, as well as online.

DVB counted five deaths in Yangon and two in Mandalay, the largest and second-largest cities.

“The world is watching the actions of the Myanmar military junta, and will hold them accountable,” said Phil Robertson, deputy Asia director for New York-based Human Rights Watch. “Live ammunition should not be used to control or disperse protests and lethal force can only be used to protect life or prevent serious injury.”

Security forces began employing rougher tactics on Saturday, taking preemptive actions to break up protests and making scores, if not hundreds, of arrests. Greater numbers of soldiers also joined police. Many of those detained were taken to Insein Prison in Yangon’s northern outskirts, historically notorious for holding political prisoners.

According to the Assistance Association of Political Prisoners, as of Saturday, 854 people had been arrested, charged or sentenced at one point in relation to the coup, and 771 were being detained or sought for arrest. The group said that while it had documented 75 new arrests, it understood that hundreds of other people were also picked up Saturday in Yangon and elsewhere.