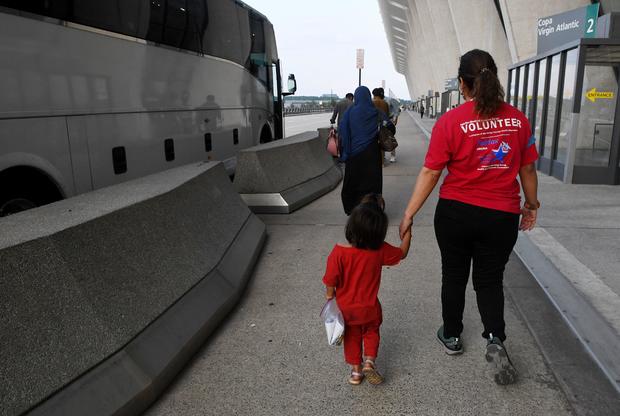 The federal government is currently caring for more than 100 Afghan children who arrived in the U.S. without their parents , the Department of Health and Human Services (HHS) said on Wednesday.

While the vast majority of Afghan evacuees arriving in the U.S. this summer have been families and adults, some evacuated children have been entering the country without their parents, prompting U.S. immigration authorities to designate them as unaccompanied minors.

The “majority” of those children have been quickly reunited with non-parental relatives who were also evacuated and relocated to the U.S., HHS said. Others who don’t have family in the U.S. will remain in the custody of HHS’ Office of Refugee Resettlement until they turn 18 or a suitable sponsor can be located.

“We are working to ensure that Unaccompanied Afghan Minors (UAM) who are referred to the Office of Refugee and Resettlement (ORR) for processing, unification, or placement are placed with licensed care providers that are able to provide culturally and linguistically appropriate services or unified directly with a vetted sponsor, such as a family member who arrived with the minor,” HHS said in a statement to CBS News.

As of August 26, 34 unaccompanied Afghan children had been referred to the refugee office, CBS News reported at the time. Last week, Department of Homeland Security (DHS) Secretary Alejandro Mayorkas said the U.S. expects more unaccompanied children to arrive in the future.

Since August 17, approximately 48,000 Afghan evacuees deemed to be at-risk of being harmed in Taliban-controlled Afghanistan have been allowed to enter the U.S., according to DHS figures. Thousands of other evacuees, including dozens of unaccompanied children, remain at military sites in Europe and the Middle East awaiting processing.

After arriving in the U.S., most at-risk Afghans have been transferred to one of eight military installations that are serving as temporary housing sites while the evacuees undergo coronavirus testing, vaccination, medical checks and additional immigration processing.

On September 4, the refugee agency issued field guidance instructing officials to “expeditiously” release Afghan children who arrived without a parent to non-parental caregivers who were also evacuated, according to an internal memo obtained by CBS News.

Officials still have to establish identities and a bona fide relationship between the children and caregivers, and look for any red flags. But they can rely on background checks conducted by other U.S. agencies to ensure the “caregiver has not engaged in criminal conduct,” the memo said.

While “many” of the Afghan unaccompanied children are arriving with family members, the memo recognized that some may come truly alone and not have sponsors in the U.S. Those children could be placed in long-term foster care programs, according to the memo.

An HHS official said the department is striving to “maintain the connection” between Afghan children and the non-parental family members with whom they traveled to the U.S. The department can also call the parents of these children, even if they remain in Afghanistan, the official added.

“We have the ability to ensure that the quick unification with the minor is the safest and least traumatic outcome,” the HHS official said.

HHS also confirmed on Wednesday that it has deployed caseworkers to airports in Philadelphia and Dulles, Virginia — as well as U.S. military sites receiving Afghan evacuees — to help process children who arrive without their parents.

The vast majority of children in the refugee agency’s care are Central American teenagers who crossed the U.S.-Mexico without their parents. Many of them have family members in the U.S. who can sponsor them and get them out of government custody.

As of Tuesday morning, the refugee office was housing 14,200 unaccompanied children in shelters and emergency housing sites across the U.S., according to federal data.

The September 4 memo noted that, unlike migrant children who cross the southern border illegally, unaccompanied minors from Afghanistan are entering the U.S. legally and will not be placed in deportation proceedings.

However, Afghan children are entering the U.S. under parole, a temporary legal tool that authorizes the entry of immigrants without visas on humanitarian grounds.

Because parole is “not a lawful immigration status,” the September 4 memo said, Afghan children who arrive in the U.S. without their parents or legal guardians will be classified as unaccompanied minors, like those crossing the southern border alone.

Kids in Need of Defense, the largest U.S.-based nonprofit serving migrant children, urged the Biden administration to deploy HHS caseworkers to airports and military sites receiving Afghan evacuees to expedite the release of unaccompanied minors. The minors should also have access to lawyers and child advocates, the group said.

Wendy Young, the group’s president, noted that unaccompanied Afghan children arriving in the U.S. and other countries may have lost their family members or been separated from them during the chaotic evacuations from Kabul.

“What the United States and other nations do now will determine the trajectory of these children’s lives,” Young said. “The United States has a responsibility to get this right.”