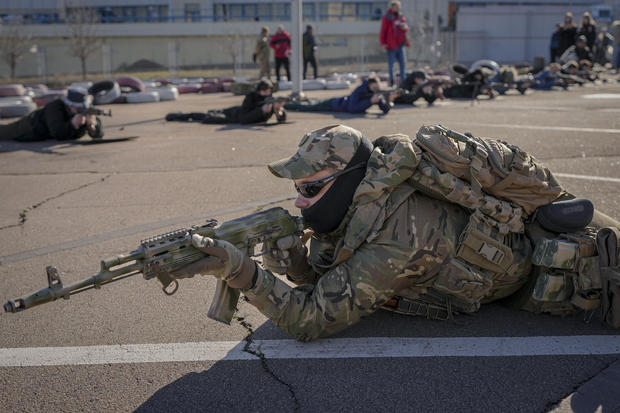 Secretary Antony Blinken announced Monday the U.S. is temporarily moving embassy operations in Ukraine from Kyiv to Lviv, due to the “dramatic acceleration in the buildup of Russian forces.” This is consistent with CBS News’ reporting that the U.S. is preparing to withdraw all personnel from Kyiv in the next 24 to 48 hours, according to three sources.

“The path for diplomacy remains available if Russia chooses to engage in good faith,” Blinken said in a statement Monday. “We look forward to returning our staff to the embassy as soon as conditions permit.”

The U.S. has already ordered all non-emergency employees to leave the U.S. embassy in Kyiv. The U.S. embassy tweeted Saturday morning that the “continued reports of a Russian build-up on the border with Ukraine indicated “potential for significant military action.”

Consular services at the Kyiv embassy were set to be suspended Sunday. U.S. officials believe Russia could invade and attack as soon as this week.

The U.S. has threatened massive economic and political consequences if Russia invades Ukraine, but the pressure hasn’t stopped Russia’s massive military buildup. U.S. officials say Russia now has 80% of the forces it will need to launch a full-scale invasion, and the rest are en route. More than 100,000 Russian troops are amassed along Ukraine’s borders — to the east, in Russia, and the north, in Belarus.

National security adviser Jake Sullivan warned Sunday morning on “Face the Nation” that Russian President Vladimir Putin could give the orders for an invasion “essentially at any time.”

“We have seen over the course of the past 10 days a dramatic acceleration in the build-up of Russian forces and the disposition of those forces in such a way that they could launch a military action essentially at any time,” Sullivan said. “They could do so this coming week, but of course, it still awaits the go-order” from Putin.

President Biden spoke with Ukrainian President Volodymyr Zelenskyy on Sunday. According to a Ukrainian readout of their call, Zelenskyy invited Mr. Biden to Ukraine, saying it would send a  “powerful signal and contribute to de-escalation.”

Zelenskyy stressed that Ukraine understands all current risks and is ready for any developments. “We will stop any escalation towards Ukraine,” Zelenskyy said, according to the readout. “The capital of Ukraine, Kyiv, and other cities of our state – Kharkiv and Lviv, Dnipro and Odesa – are safe and under reliable protection.”

The White House said that during the call, Mr. Biden reaffirmed the commitment of the United States to Ukraine’s sovereignty and territorial integrity. The White House said that Mr. Biden made clear that the United States would respond “swiftly and decisively, together with its Allies and partners, to any further Russian aggression against Ukraine.”

The two leaders agreed on the importance of continuing to pursue diplomacy and deterrence in response to Russia’s military build-up on Ukraine’s borders, the White House said.

Americans working for the Organization for Security & Cooperation in Europe (OSCE) special monitoring mission to Ukraine were pulled out on Sunday, the US mission to the OSCE confirmed. Those monitors operated throughout the country but were particularly focused on a fragile ceasefire in the east where pro-Russian separatists have been fighting since the 2014 Russian incursion into the area. The U.S. mission to the OSCE warned that those in eastern Ukraine were “highly exposed” and added that security conditions — particularly in Russia-occupied Crimea in Russia-controlled eastern Ukraine —  could “deteriorate with little notice.”

Russian intelligence has claimed things are happening in the east of Ukraine and especially the Donbas region.

Sullivan acknowledged that there is a distinct possibility that Russia may chose that area to launch a false flag attack in order to justify an invasion.  ”We also are watching very carefully for the possibility that there is a pretext or a false flag operation to kick off the Russian action in which Russian intelligence services conduct some kind of attack on Russian proxy forces in eastern Ukraine or on Russian citizens, and then blame it on the Ukrainians,” Sullivan said Sunday on “Face the Nation.”

Pentagon press secretary John Kirby said Saturday that 160 members of the Florida National Guard who have been in Ukraine since November — advising and mentoring Ukrainian forces — will be moved “elsewhere in Europe,” “out of an abundance of caution.”

The U.S. is deploying additional forces to bolster the American military presence in Eastern Europe. The Pentagon announced on Friday it is sending 3,000 more troops into Poland. They will join the 3,000 others already there and in Romania, to reinforce allies should Putin decide to make a move.

The White House says the American military is not going into Ukraine to fight Russia, or even to help evacuations.

“That’s a world war, when Americans and Russians start shooting at one another,” Mr. Biden said in an interview with NBC’s Lester Holt that aired before the Super Bowl.

He said Putin knows not to put American lives at risk.

“I’m hoping that if in fact he’s foolish enough to go in, he’s smart enough not to in fact do anything that would negatively impact on American citizens,” he said.

Gabrielle Ake and Kristin Brown contributed to this report.