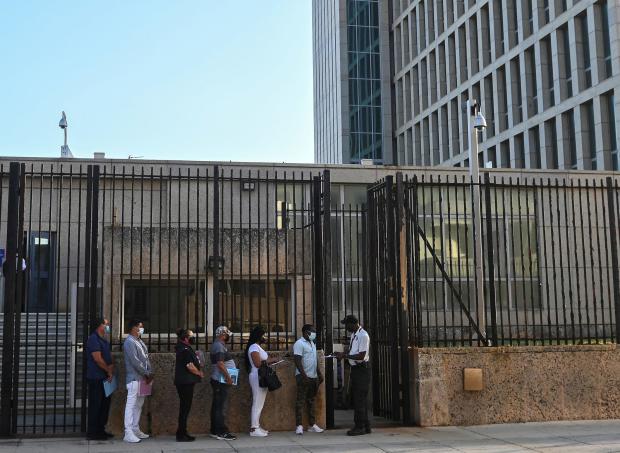 The Biden administration will fully resume immigrant visa processing at the American embassy in Havana in early 2023 as part of an effort to discourage illegal immigration from Cuba, which has seen record numbers of its citizens flee to the U.S.-Mexico border over the past year, officials announced Wednesday.

When the policy change takes effect, Cubans sponsored by their U.S.-based relatives will no longer need to travel to Guyana for interviews with U.S. consular officers, one of the required steps in the immigrant visa process. Instead, all Cubans applying for visas to come to the U.S. will undergo these interviews at the embassy in Havana.

The State Department, which oversees consular officers, also announced the U.S. will dispatch additional immigration caseworkers to Cuba to expedite applications for the Cuban Family Reunification Parole program, which the Biden administration revived this summer after its suspension by the Trump administration.

The program, first launched in 2007, allows U.S. citizens and permanent residents who have successfully sponsored their relatives in Cuba for an immigration visa to apply for their family members to enter the U.S. before their visas become available.

“These efforts are a key step to meet the U.S. commitment under the U.S.-Cuba Migration Accords to ensure that total legal migration to the United States from Cuba will be a minimum of 20,000 Cubans each year, not including immediate relatives of U.S. citizens,” the department said.

Wednesday’s announcement comes as the Biden administration continues to struggle to process large numbers of Cuban migrants entering U.S. border custody. In fiscal year 2022, nearly 200,000 Cubans have been processed by U.S. border officials, a spike of more than 400% from 2021, government data show.

Like the regimes in Venezuela and Nicaragua, which have also seen record numbers of their nationals journey to the U.S. border in the past year, the Cuban government has not been accepting U.S. deportations, meaning the vast majority of Cuban migrants who enter the U.S. illegally are released to await their asylum hearings.

While the Obama administration in 2017 ended the long-standing “wet foot, dry foot” policy that virtually guaranteed Cubans U.S. entry if they set foot on American soil, a Cold War-era law still allows some Cuban migrants who are granted parole to apply for permanent residence after a year in the country.

Earlier this year, the Biden administration held talks with Cuban officials about an accord forged by the two countries in 2017 in which Cuba agreed to accept deportations from the U.S. But the government in Havana has yet to publicly commit to accepting regular U.S. deportation flights.

In addition to the record arrivals along the southern border, the number of Cuban migrants interdicted at sea on their way to the U.S. has increased sharply over the past year. The U.S. Coast Guard has interdicted 5,545 Cubans at sea in fiscal year 2022, a 562% increase from 2021, according to government figures.