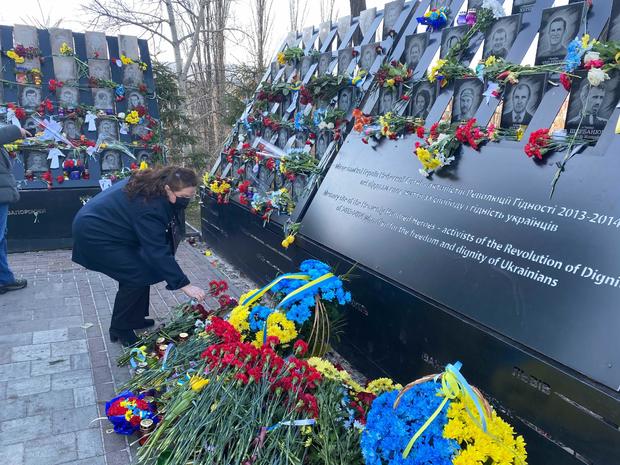 Kyiv – Ukrainians on Sunday remembered and honored the lives of dozens of people who were gunned down by the government during the country’s 2014 popular uprising — called the Maidan revolution — that forced Russian-backed then-President Viktor Yanukovych out of power eight years ago. But on a day that many spent laying flowers at the memorials of those who died fighting against Russian influence over Ukraine, a new threat of a Russian invasion loomed large.

“It’s a big stress that we are facing, but we have been at war with Russia for the last eight years,” 23-year-old Iuliia, who gathered with other demonstrators at Maidan Square, told CBS News. “For me, it was a good sacrifice and a sign that people were willing to fight for their freedom, their country, and their right to live the way they want…  it was really meaningful back then and it’s still meaningful today,” she said.

“I think that the Ukrainian people has made its decision, and I don’t think that Russia is in a position to overturn it,” 34-year-old Artem, who participated in the Maidan protests, told CBS News. He was wrapped in a Ukrainian flag.

“The only question that’s remaining is the price that Ukraine and the world is going to pay,” he added. “And I hoped that the price that people paid eight years ago here would be sufficient. But it’s not sufficient. We see people dying in the east of Ukraine… I hope that the world will be able to stand united with Ukraine in opposition to Russian aggression, to its imperial ambitions. We need to get together and to stand strong.”

A symbolic time for the threat of Russian invasion

The Maidan uprising, also known as the “Revolution of Dignity,” lasted for months. After Yanukovych, bowing to pressure from Russia, declined to sign a popular trade agreement with the European Union, thousands took the streets. Some 25,000 people camped out in Maidan, Kyiv’s central square, where they were beaten and shot at by police and government security forces. Dozens of activists were killed.

In February 2014, after several days of deadly protests, Yanukovych fled the country. New elections were called, and the most violent units of the security forces were disbanded.

“It’s symbolic that Putin decided to start it all around these dates,” Svitlana Zalishchuk, a prominent Maidan uprising activist and former politician, told CBS News. “It’s as if he says: ‘Ok, you won the revolution, but here is the military scenario, and we’ll see who’s going to win now.'”

Zalishchuk curated a Facebook page that became a main source of information for protesters during the uprising.

But Zalishchuk said that, as in 2014, the Ukrainian people would not be easily defeated.

“When Putin is renegotiating the world order, the West still is negotiating the de-escalation in Ukraine. And this is the problem at the moment. Because it’s not just about Ukraine, obviously, it’s about Putin. He wants to have this informal veto right on global decision-making. He wants to sit at the global table and saying what choices countries should make, especially his neighbors or post-Soviet Union countries,” she told CBS News.

“We made our choice in 2014,” she said. “We chose democracy over the over dictatorship. We chose freedom of speech and freedom of elections. We chose European values. And we also proved that we can defend them.”