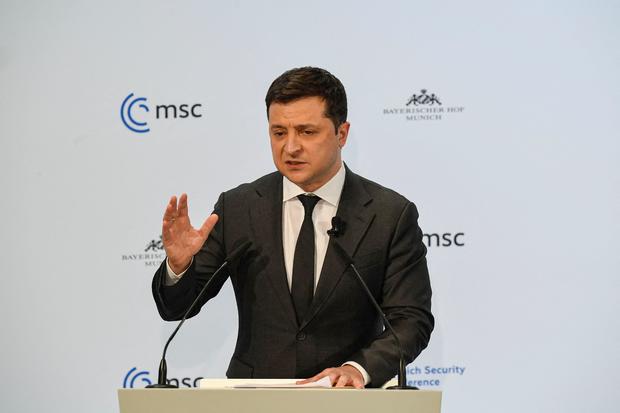 Ukrainian President Volodymyr Zelensky told Western leaders gathered at a security conference in Munich on Saturday that he wants sanctions to be imposed against Russia before any potential invasion of his country, not after.

“You’re telling me that it’s 100% that the war will start in a couple of days. Then what [are you] waiting for?” Zelensky said. “We don’t need your sanctions after the bombardment will happen, and after our country will be fired at or after we will have no borders or after we will have no economy or parts of our country will be occupied. Why would we need those sanctions then?”

“So when you’re asking what can be done, well lots of different things can be done. We can even provide you the list. The most important is willingness,” he said.

Earlier on Saturday, U.S. Vice President Kamala Harris warned of financial penalties for Russia if it launches an invasion.

“Let me be clear, I can say with absolute certainty: If Russia further invades Ukraine, the United States, together with our allies and partners, will impose significant, and unprecedented economic costs,” she said at the security conference.

She also met with Zelensky.

“They discussed the united Transatlantic approach if Russia further invades Ukraine, and the Vice President outlined the swift and severe economic measures that have been prepared alongside our Allies and partners,” according to the White House. “The Vice President and President Zelenskyy agreed on the importance of diplomacy and de-escalation.”

A potential Russian invasion of Ukraine is a leading topic at the Munich Security Conference, which is an annual event to prevent another war in Europe.

U.S. Secretary of Defense Lloyd Austin said Saturday during a visit to Lithuania that Russia is “uncoiling and are now poised to strike.”

There had been concern among delegates over whether it was a good idea for Zelensky to leave Ukraine with the threat of Russian invasion looming.

When asked about the topic, Zelensky said he had eaten breakfast in Ukraine, and he would eat dinner there.

“I’m sure that our country is in good hands. This is not just my hands — these are hands of our soldiers and citizens. I think my visit here is important,” he said.

Zelensky said the current crisis in Ukraine was not just regional, but about the whole world.

“This system is slow and failing us time and again, because of arrogance and irresponsibility of countries on a global level,” he said.

Zelensky said he wanted to meet with Russian President Vladimir Putin to come up with a solution to the crisis.