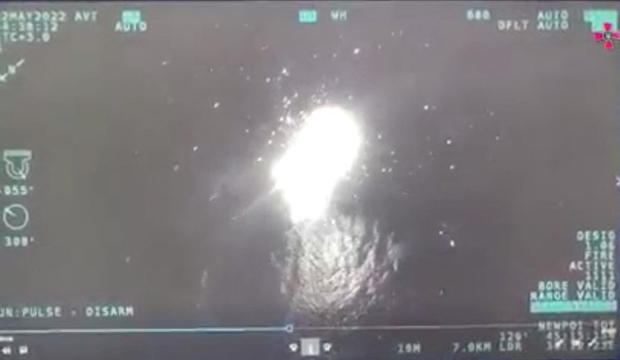 Kyiv said Monday that its drones sank two Russian patrol boats near the Black Sea’s Snake Island where Ukrainian soldiers rebuffed Moscow’s demands to surrender at the start of its invasion.

“The Bayraktars are working,” Valeriy Zaluzhnyi, the commander in chief of the Ukrainian Armed Forces, was cited as saying in the statement, referring to Turkish-made military drones.

Raptor patrol boats can carry up to three crew and 20 personnel. They are usually equipped with machine guns and used in reconnaissance or landing operations.

Snake Island became a symbol of Ukrainian resistance after a radio exchange went viral in which Ukrainian soldiers rebuffed demands from crew of a Russian warship to surrender.

The Russian ship involved, the Moskva, sank in the Black Sea in mid-April following what Moscow said was an explosion on board. Ukraine said it had hit the warship with missiles.

The reported drone strikes come more than two weeks after the Ukrainian military said that it had badly damaged one of Russia’s most essential warships with a missile strike off Ukraine’s battered southern coast.

Meanwhile, a long-awaited effort to evacuate people from a steel plant in the Ukrainian city of Mariupol has begun, the International Committee on the Red Cross (ICRC) and Ukrainian President Volodymyr Zelenskyy said Sunday.

The operation to bring people out of the sprawling Azovstal steel plant was being done by the ICRC with the United Nations and in coordination with Ukrainian and Russian officials, an ICRC spokesperson told CBS News. Zelenskyy tweeted that the “1st group of about 100 people is already heading to the controlled area,” and said Ukrainian officials are “working on the evacuation of other civilians from the plant.”