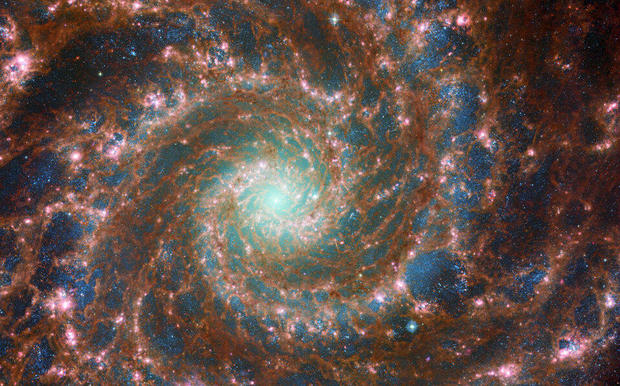 The veteran and the new kid on the block have teamed up to produce a spectacular image of the Phantom Galaxy.

The European Space Agency released a new photo Monday capturing the heart of Messier 74, located 32 million light years away in the Pisces constellation. It’s a view that combines the Hubble Space Telescope’s strong vision at ultraviolet and visible wavelengths with the James Webb Space Telescope’s unprecedented sensitivity at infrared wavelengths.

“By combining data from telescopes operating across the electromagnetic spectrum, scientists can gain greater insight into astronomical objects than by using a single observatory — even one as powerful as Webb,” the space agency said.

M74 is made up of about 100 billion stars and two symmetrical “arms.” It is in a subclass of spiral galaxies known as a “grand design spiral,” meaning it has prominent and well-defined arms, whereas some other galaxies are not as clear.

Its characteristics make it a “favorite target” for astronomers, the space agency says.

Launched in 1990, Hubble has spent decades beaming jaw-dropping images back to Earth, exponentially expanding our understanding of the cosmos. The Webb Telescope, the most expensive science probe ever built, launched just this year, with the goal of studying the origins of the universe.

Webb has already beamed back the most detailed images of space seen to date, and scientists are eager to combine its findings with past revelations to continue piecing together our universe’s history.

Webb’s superior technology beautifully reveals the gas and dust spiraling outward from the heart of M74. The agency said that the image also shows off a clear view of the nuclear star cluster at the center, thanks to a lack of gas in the area.

ESA highlighted the images each telescope captured on its own — as well as the power of combining them. The dust in the image is colored red, young stars can be seen in blue and older stars are yellow, marked by a “spooky green glow” when the colors combine.

Webb captured the galaxy using its Mid-InfraRed Instrument in its quest to study the earliest phases of star formation. It’s part of a larger collaborative effort to document 19 nearby star-forming galaxies that have already been studied using both Hubble and observatories on Earth.

“The addition of crystal-clear Webb observations at longer wavelengths will allow astronomers to pinpoint star-forming regions in the galaxies, accurately measure the masses and ages of star clusters, and gain insights into the nature of the small grains of dust drifting in interstellar space,” the agency said.

Sophie Lewis is a social media producer and trending writer for CBS News, focusing on space and climate change.