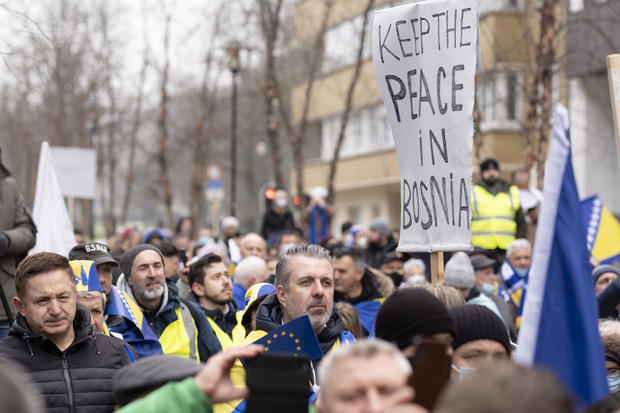 London — More than 25 years after a brutal war tore Bosnia apart and left more than 100,000 people dead, the country is once again mired in a political crisis that some fear could push it back into armed conflict.

When Bosnia and Herzogovina, which had been part of Yugoslavia, was declared an independent nation in 1992, it was made up of ethnic Serbs, Bosniaks, and Croats. Bosnian Serbs, who were outnumbered in the new nation, resisted Bosnian independence, however. They were supported by ethnic Serbs in other parts of the former Yugoslavia, including the neighboring nations of Serbia and Croatia.

Soon after Bosnia and Herzegovina was recognized as an independent nation, Bosnian Serbs began attacking towns and cities with large Bosniak populations. Within weeks, nearly two thirds of Bosnian territory was under Serb control. More than 1 million Bosniaks and Croats were forced from their homes and roughly 100,000 people killed in what became a proven case of genocide by the Bosnian Serb army.

The international community was seen as ineffective in stopping the violence. Even after the town of Srebrenica was declared a United Nations “safe zone” in 1995, more than 7,000 Bosniak men were killed there in a massacre when U.N. peacekeepers failed to protect the area.

After an eventual NATO bombing campaign, a U.S.-brokered peace deal divided the country into two self-governing, but united entities: A Serb-led entity called Republika Srpska with its own government now exists in the north and east, within the borders of Bosnia and Herzegovina.

Late last year, Bosnian Serb leader Milorad Dodik sparked fears of a succession bid when he said Republika Srpska would pull out of three key Bosnia Herzegovina state institutions — the armed forces, the top judiciary body and the tax agency. Those moves would violate the terms of the 1995 peace deal that ended the war.

Dodik also said the Bosnian intelligence and security agencies would be banned from operating in Republika Srpska.

His rhetoric sparked demonstrations across Europe, and in New York and Washington D.C., with protesters demanding the international community intervene — this time before the tension turns to bloodshed. The U.S. government has called for an investigation into reports that banned ceremonies were held by Bosnian Serbs earlier this month, glorifying the 1992 declaration of independence by Republika Srpska from Bosnia.

The ceremonies, reportedly led by Dodik himself, were also said to be attended by Serbian, Russian and Chinese officials.

“The United States is deeply concerned over reports of hate speech, glorification of war criminals and provocative incidents targeting returnees in the Republika Srpska entity,” a spokesperson for the U.S. State Department said in a statement. “We urge competent authorities to investigate these incidents without delay and to hold the responsible individuals accountable.”

“The events we have witnessed in the last six months are too reminiscent of the pre-war period, and at least we survivors have the duty and the right to speak publicly and say clearly,” protest organizers said on Facebook.

They stressed that they “do not want war and division.”

“Bosnia and Herzegovina, she must not be put in the position she was… with the establishment of parallel institutions and autonomous territories contrary to the constitution of the state, which was the introduction to aggression, persecution, mass war crimes and genocide for which many have been brought to justice… We are asking to prevent the repetition of history from the nineties!” they said.