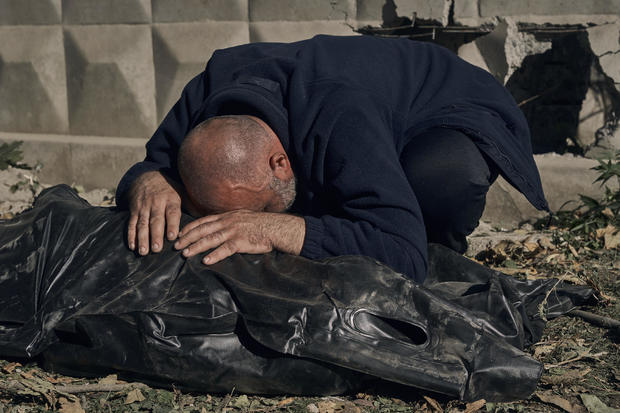 Russia launched new attacks around Ukraine’s capital and other regions overnight, including sending Iranian-made kamikaze drones packed with explosives hurtling into towns around Kyiv. The drone attack set off air raid sirens and sent people running for shelters yet again in the capital, in a fourth day of reprisals by Moscow for a bombing that damaged a bridge providing the only land link between Russia and the occupied Crimean Peninsula.

Vladimir Putin’s escalating war on Ukraine is now led by a hard-line commander whose reputation for brutality earned him the nickname “General Armageddon.” For days it has been clear that the strategy is to increase the aerial assault not only on the front lines, where Russia has lost ground in recent weeks, but across Ukraine.

It wasn’t immediately clear if the kamikaze drones had killed or wounded anyone, but Ukrainian officials said Thursday that 13 people were killed and almost 40 others wounded over the preceding 24 hours of Russian missile strikes all around Ukraine.

The southern city of Mykolaiv was struck again early Thursday, with Russian missiles destroying a five-story apartment building. The regional governor, Vitaliy Kim, said an 11-year-old boy was rescued from the debris six hours after the strike, but seven others remained missing.

Kim said Russia hit the building with an S-300 missile — a weapon designed, and usually used to bring down enemy aircraft. Russia has seemingly turned to the S-300s more often to carry out indiscriminate attacks on Ukrainian cities, amid intelligence reports that Putin’s army is running low on weaponry, and on morale.

“We know, and Russian commanders on the ground know, that their supplies and munitions are running out,” Sir Jeremy Fleming, head of Britain’s cyber intelligence agency GCHQ said in a speech on Tuesday.

The city of Zaporizhzhia — in Ukrainian-held territory but not far from the sprawling, Russian-occupied nuclear power plant that has been the focus of rising concern over a possible nuclear accident — was also hit again on Thursday.

The city, about 20 miles from the nuclear plant, has been the target of relentless Russian bombardment. Some of the missiles have slammed down in residential areas, and CBS News saw rescuers pulling one victim from beneath the rubble of an apartment building.

Over the past two weeks, more than 70 civilians have been killed by Russia’s aerial assault in Zaporizhzhia alone, according to Ukrainian officials.

Ukraine’s military claims it has managed to shoot down dozens of the missiles and Iranian-made “Shahed-136” drones Russia has fired over the past week, but with so many still getting through to wreak havoc on the country’s infrastructure and beleaguered civilians, it is desperate for more help.

To stop the aerial assault, President Volodymyr Zelenskyy begged this week for the U.S. and other partners to send Ukraine more, and more advanced, missile defense systems. He was assured that help is on the way.