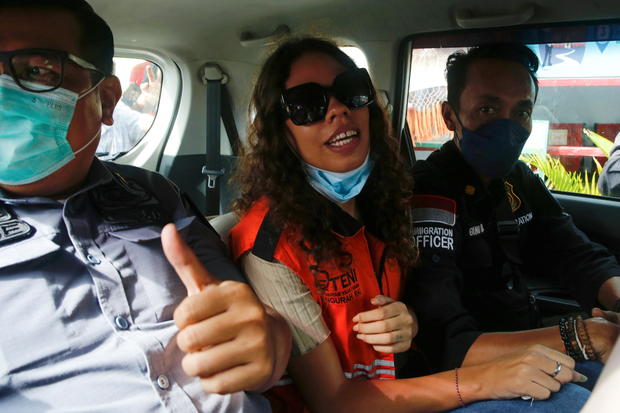 The Illinois woman convicted in Indonesia of helping her boyfriend kill her mother and hiding her body in a suitcase arrived in the U.S. on Wednesday morning and was immediately taken into federal custody on a new set of charges, according to the Department of Justice. Heather Mack, 26, is now facing conspiracy and obstruction of justice charges.

Mack and her boyfriend, Tommy Schaefer, were convicted in Indonesia in 2015 of killing her wealthy socialite mother, Sheila Von Wiese-Mack. Mack was released from an Indonesian prison last week after serving more than seven years, and was deported back to the U.S. soon after. Schafer is still serving an 18-year sentence in Indonesia.

A federal indictment from 2017, which was unsealed as Mack flew to Chicago on Wednesday, accuses Mack and Schaefer of conspiring to kill Von Wiese-Mack in her hotel room at a Bali resort in August 2014, and of hiding her body in a suitcase and leaving it in the trunk of a taxi. Both are charged with one count of conspiracy to kill in a foreign country, one count of conspiracy to commit foreign murder of a U.S. national, and one count of obstruction, the Department of Justice said.

After killing Von Wiese-Mack, Mack and Schaefer “corruptly destroyed, mutilated and concealed objects,” by putting her mother’s body in a suitcase and removing it from the scene of the crime, and removing “linens and items of clothing worn during the killing,” according to the indictment.

Mack returned to the U.S. with her daughter Stella and the woman who helped care for the child while she was in prison, according to Mack’s attorney, Brian Claypool. Prior to Mack’s arrival, her lawyers filed an emergency court order to make sure Stella, who was born while her mother was in prison, wouldn’t be taken into child protective services, CBS Chicago reports .

Claypool denounced his client’s arrest, saying it violated federal law. He plans to file a motion to throw out the charges.

“Heather has already faced a legitimate trial in Indonesia that included evidence that was assisted by the FBI, in front of a three-judge panel. This was not a kangaroo court in Indonesia. Heather was 18 at the time of this alleged crime,” he said, according to CBS Chicago. “She’s done her time.”

Claypool also told The Associated Press that the conspiracy charge had been included in Mack’s conviction in Indonesia.

Mack pleaded not guilty in court Wednesday afternoon, according to the Associated Press. She was ordered to stay in custody until her next hearing, which is scheduled for November 10.

In 2016, Schaefer’s cousin, Robert Bibbs, pleaded guilty to conspiracy to commit foreign murder of a U.S. national after admitting he told Schaefer how to get away with the murder, CBS Chicago reports. He was sentenced to 9 years in prison.

Sophie Reardon is a News Editor at CBS News. Reach her at sophie.reardon@viacomcbs.com