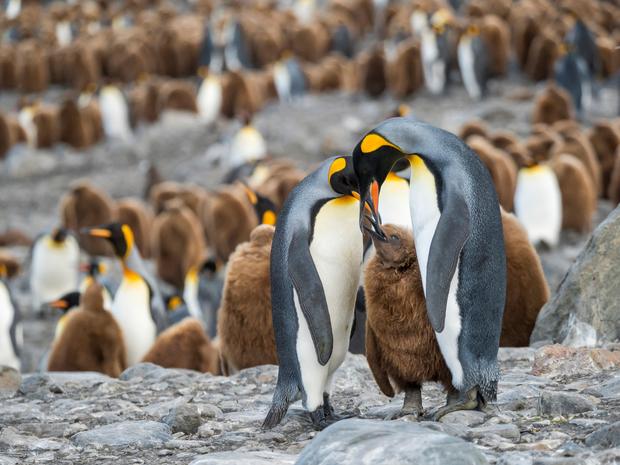 An enormous iceberg measuring roughly the length of Delaware broke off an Antarctic ice shelf in 2017. Now, that iceberg is headed directly for South Georgia Island — threatening to devastate the fragile penguin colony that calls the island home.

The European Space Agency says the iceberg, called A68a, is on course to collide with the island after years of floating towards it due to ocean currents.  A68a is currently less than 100 miles off the coast of the South Atlantic island — and scientists predict the collision could occur within days or weeks.

A collision threatens the unique wildlife that lives on the British overseas territory, including 1.3 million pairs of Chinstrap penguins — one of the world’s largest colonies — about 5 million seals, and 65 million breeding birds. If the iceberg anchors itself in place, it would block the local wildlife’s foraging routes, making it extremely difficult to find food.

“When you’re talking about penguins and seals during the period that’s really crucial to them – during pup- and chick-rearing – the actual distance they have to travel to find food (fish and krill) really matters,” Professor Geraint Tarling, an ecologist at British Antarctic Survey, said in a news release last month. “If they have to do a big detour, it means they’re not going to get back to their young in time to prevent them starving to death in the interim.”

The island is situated inside a Marine Protected Area , allowing countless species to thrive. In addition to life on the island, the iceberg also threatens marine life on the seafloor, including coral, plankton and sponges.

“Ecosystems can and will bounce back of course, but there’s a danger here that if this iceberg gets stuck, it could be there for 10 years,” Tarling said. “An iceberg has massive implications for where land-based predators might be able to forage.”

Not only would avoiding a collision protect the South Georgian wildlife, it would also bring benefits to the environment. Tarling said that, if the iceberg were to remain in the open ocean, it will help fertilize ocean plankton, which cascades up the food chain and draws in carbon from the atmosphere, hopefully offsetting human CO2 emissions.

According to NASA , the iceberg measures about 93 miles long and 30 miles wide — nearly the size of the island itself.

It is difficult for scientists to predict the movements of the iceberg over the coming days, as they are dictated by changing ocean currents and storms. But its proximity to the island has made the collision increasingly likely, although not inevitable, and government officials, the British Royal Air Force and scientists alike are all currently tracking the iceberg’s every move, along with the currents and winds that direct it.

The currents “still have the power to take this iceberg in one direction or another away from South Georgia,” Tarling told Reuters on Wednesday. “But it is really, really close, less than 50 kilometers (31 miles) away from the south shelf edge. That’s getting so close that it’s almost inevitable.”

This week, the British Royal Air Force released new images and video footage of the iceberg, which capture its monstrous size, as well as its many tunnels, cracks and fissures. It has diminished substantially in size in the last few years, and the images also show a large number of smaller icebergs in the surrounding waters.

Officials said it was nearly impossible to photograph the iceberg due to its massive size, with the exception of satellite imagery.

When A68a broke off the Larsen C Ice Shelf on the Antarctic Peninsula in July 2017, scientists expected the 1-trillion ton iceberg to break apart fairly quickly. While A68a has followed the path of other broken-off icebergs, its sheer size allowed it to survive longer than most, which traditionally break apart in warmer waters before reaching South Georgia.

The peninsula is one of the fastest-warming places on Earth , reaching a record high temperature of nearly 70 degrees Fahrenheit last February. Ice melt and collapse in the region will inevitably lead to disastrous higher sea levels worldwide.