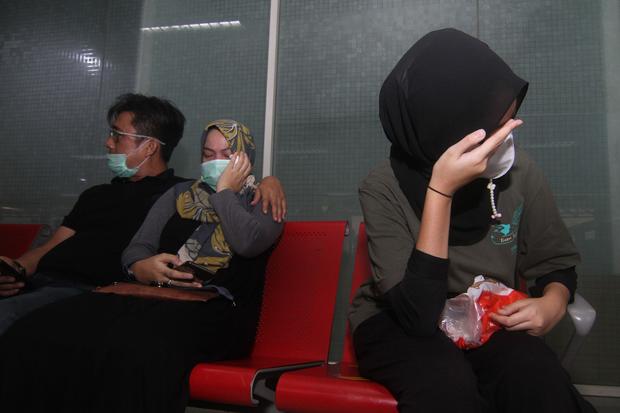 A Sriwijaya Air passenger plane lost contact with air traffic controllers after taking off from Jakarta on a domestic flight, officials say. The jet, a Boeing 737-500, was carrying 62 people.

Transportation Minister Budi Karya Sumadi said Flight SJ182 was delayed for an hour before it took off at 2:36 p.m. The plane disappeared from radar four minutes later, after the pilot contacted air traffic control to ascend to an altitude of 29,000 feet, he said.

Tracking service Flightradar24 said the plane lost more than 10,000 feet of altitude in less than a minute.

A statement released by the airline said the plane was on an estimated 90-minute flight from Jakarta to Pontianak, the capital of West Kalimantan province on Indonesia’s Borneo island. There were 56 passengers and six crew members onboard.

Local media reports said fishermen spotted metal objects believed to be parts of a plane on Saturday afternoon in the Thousand Islands, a chain of islands north of Jakarta. Irawati said a search and rescue operation was underway in coordination with the National Search and Rescue Agency and the National Transportation Safety Committee.

7 children and 3 babies were onboard

Sriwijaya Air said in a statement that seven children and three babies were onboard the missing aircraft. The plane was manned by six active crew members, and another six crew members were passengers it said.

“Our prayers go out to all our passengers and crew and their families,” the statement said, according to a translation from Google.

A dozen vessels have been deployed in a search and rescue operation for the missing plane, including four warships, said Transportation Minister Budi Karya Sumadi.

The search is centered between Lancang island and Laki island, part of the Thousand Islands chain just north of Jakarta.

By Associated Press 9:07 AM

The aircraft that went missing Saturday took its first flight in May of 1994, according to Flightradar24, meaning it was more than 26 years old. It isn’t uncommon, however, for planes of that age to be operating, BBC News reports.

“The Sriwijaya Air flight appears to have been carried out by a Boeing 737-500,” writes BBC business correspondent Theo Leggett. “This plane formed part of the 737 Classic series, the second generation of 737, which was built during the 1980s and 1990s. The plane, seen as a workhorse aircraft for many years, has a strong safety record.”

He said the aircraft shouldn’t be confused with the more modern 737 Max, which was grounded after two fatal accidents in 2018 and 2019.

Witnesses say they saw and heard at least one explosion

Solihin, a fisherman, told the BBC Indonesian service he saw a crash. His captain made the decision to head back to land.

“The plane fell like lightning into the sea and exploded in the water,” he said.

“It was pretty close to us, the shards of a kind of plywood almost hit my ship.”

Tracking service Flightradar24 says the highest altitude the aircraft reached was 10,900 feet, and that the last recorded altitude was 250 feet.

Boeing says it is “aware of media reports from Jakarta” and is closely monitoring the situation.

“We are working to gather more information,” it says.

Island residents say they found objects believed to be from plane

Residents of an island close to where the aircraft went missing told the BBC Indonesian service they found objects they believed were from the aircraft, the BBC reports.

Local media reports also said fishermen spotted metal objects believed to be parts of a jet on Saturday afternoon in the Thousand Islands, a chain of islands north of Jakarta.

Indonesia has been plagued by transportation accidents

Indonesia, the world’s largest archipelago nation, with more than 260 million people, has been plagued by transportation accidents on land, sea and air because of overcrowding on ferries, aging infrastructure and poorly enforced safety standards.

In October 2018, a Boeing 737 MAX 8 jet operated by Lion Air plunged into the Java Sea just minutes after taking off from Jakarta, killing all 189 people on board. It was the worst airline disaster in Indonesia since 1997, when 234 people were killed on a Garuda flight near Medan on Sumatra island. In December 2014, an AirAsia flight from Surabaya to Singapore plunged into the sea, killing 162 people.

Sriwijaya Air is one of Indonesia’s discount carriers, flying to dozens of domestic and international destinations.